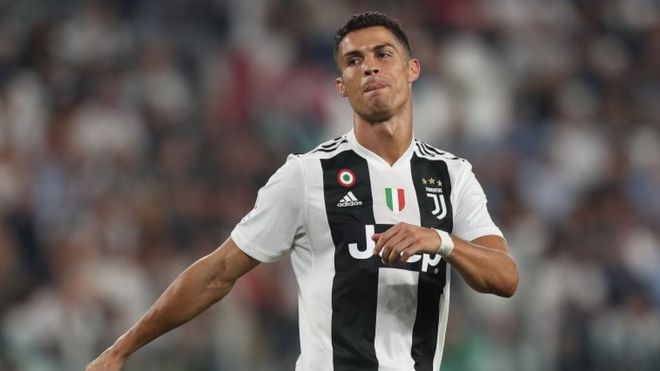 Cristiano Ronaldo has dismissed as “fake news” accusations by a US woman who alleges she was raped by the Portuguese footballer in 2009.

In an Instagram video, Ronaldo said: “They want to promote [themselves] by [using] my name. It’s normal.”

The magazine wrote that Kathryn Mayorga had claimed Ronaldo, 33, raped her in a hotel room in Las Vegas.

Ms Mayorga, 34, is reported to have filed a rape report with Las Vegas police shortly after the alleged incident.

In 2010, she reportedly reached an out-of-court settlement with Ronaldo involving a $375,000 (£288,000) payment for agreeing never to go public with the allegations.

Her lawyers are now seeking to declare the non-disclosure agreement void.

In a statement, Ronaldo‘s lawyer Christian Schertz said “the reporting in Spiegel is blatantly illegal”.

He added that he had been instructed to seek compensation for “moral damages” over “probably one of the most serious violations of personal rights in recent years”.

The Portuguese international is regarded as one of the greatest players of all time.

Tags:
Previous Article
Huddah Monroe’s ex-boyfriend Godiamo commits suicide
Next Article
I am not a single mom – Avril talks about her baby daddy

I am not a single mom – Avril talks about her baby daddy
Samcilla Baakojr September 30, 2018