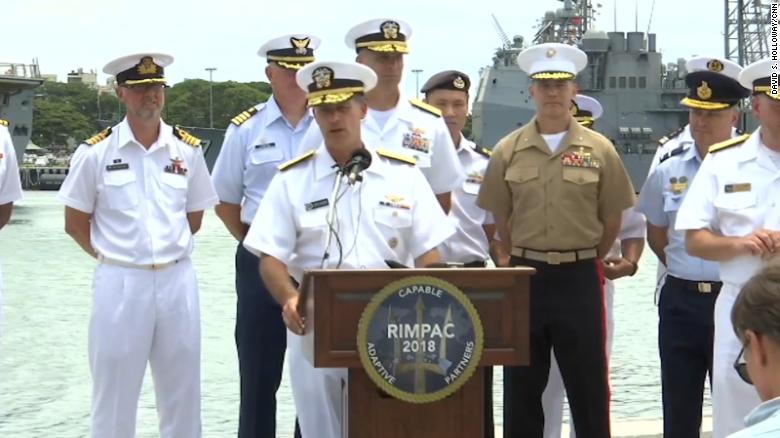 The Pentagon kicked off the world’s largest naval war games last week, the biennial, month-long Rim of the Pacific exercises, known as RIMPAC, bringing together 46 ships and submarines, 200 aircraft and 25,000 troops from 25 nations.

Missing from that contingent is China, which was disinvited from RIMPAC over its militarization of islands in the South China Sea.
But as ships were arriving in Hawaii for RIMPAC, China was completing naval exercises of its own, with a series of live-fire naval drills off Taiwan that began on June 17.
That the two sets of exercises overlap only serves to reinforce the differences between the two superpowers, as both countries vie for military influence in the Pacific.
RIMPAC is about “building relationships,” US military leaders said at a press conference in Hawaii on Thursday, pointing out Indo-Pacific nations making first-time or upgraded contributions to the exercises, including Vietnam, Malaysia and the Philippines, which all have claims in the South China Sea.

“We work together, build relationships here, so later on … it’s hard to turn down a friend,” said Vice Adm. John Alexander, commander of the US Navy’s 3rd Fleet told the Pearl Harbor gathering marking the beginning of the games.
And RIMPAC shows the US Navy is better at making friends than its Chinese counterpart, analysts say.
“China’s absence means that it loses an opportunity to … establish professional and potentially personal relationships with its regional and global naval counterparts,” said Carl Schuster, a former director of operations at the US Pacific Command’s Joint Intelligence Center.
Beijing does not host any naval exercises on the scope of RIMPAC, Schuster said.

“There is a bit of the ‘I’m the popular kid on the block approach to all this,” said Peter Layton, visiting fellow at the Griffith Asia Institute in Australia, pointing out that the US Navy knows how to show off its and its partners’ capabilities.
Among the planned RIMPAC missions are new missile demonstrations, amphibious exercises, mine clearing and anti-piracy exercises, according to the US Navy.
Expect all to be well-publicized with tweets, photos and videos and postings on the RIMPAC Facebook page.
“It highlights in graphic media detail lasting a month that navies want to exercise with the US Navy,” Layton said.
And the presence of the South China Sea nations at RIMPAC shows loyalties in the region remain very much in play, said Layton.