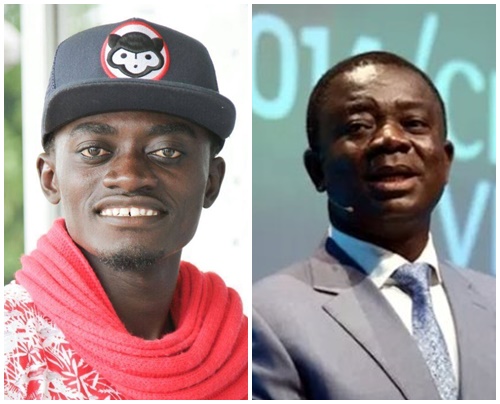 Dr Stephen Opuni, a former Chief Executive Officer of the Ghana Cocoa Board (COCOBOD), has sued Multimedia Group Limited (MGL), owners of Adom TV, for GHS10million for defaming him.

Also named in the suit are Daniel Nii Odoi Tutuwani, a producer at Adom TV and Kojo Nkansah, alias Lilwin, as second and third defendants, respectively.

In the suit filed at the Accra High Court on Tuesday, 24 April 2018, Dr Opuni stated that on or about the 24th day of March 2018, on the prime evening hour of 7pm, MGL and Daniel Nii Odoi Tutuwani caused to be broadcast and published; and Lilwin broadcast and published as part of the very popular programme entitled: ‘Don’t Think Far News’, defamatory words in a mixture of the Twi and English languages.

The suit explained that the defendants showed a recording of numerous metal boxes in rooms which were filled to the brim with US$100 bundles and stated as a fact that these said metal boxes filled with these said notes were found in the house of Dr Opuni.

The suit indicated that when translated in English, the utterances of Lilwn states as follows: “The former COCOBOD boss has his ass on fire. One of the first government appointees to be socket by the Akufo-Addo administration has been hurled before the Accra High Court and charged with causing financial loss to the state. Former COCOBOD CEO Dr Stephen Kwabena Opuni and one Seidu Agongo, together, are facing 27 charges. Dr Stephen Kwabena Opuni was appointed as CEO of COCOBOD on November 30, 2013. He was the CEO till January 2017, which is four years as CEO. After his term of office, he intended to travel abroad but was stopped by immigration officials at the airport stating that there was ongoing investigation concerning him during his term of office as CEO of COCOBOD, and, therefore, was not permitted to leave the country till the matter has been solved. Also rumour has it that he is involved in some money scandal and building of a house.

From that time till now, investigations have been ongoing. Investigations are being conducted at his house morning, afternoon, evening and midnight to and fro. Again, it has also been revealed that COCOBOD’s former CEO is guilty of stealing state funds and the sum involved is estimated to be US$ 512,000,000 which when converted into Ghanaian cedis amounts to 2.35billion.

There are trunks of money found in Dr Opuni’s possession which are stacked up in a room. These monies are not in Ghanaian currency but United States dollars and also not in smaller denominations of twenty (20) or fifty (50) dollars but in higher denomination of hundred (100) dollars with every one hundred United States dollars (US$100) equivalent to four hundred and fifty Ghana cedis (GHS450.00). This is the second room and it’s packed up like that in about twenty rooms and the rooms have their fans on so as to allow the money have enough air. This is part of the reasons first aid prices have been increased by the DVLA.

People are speculating that if he had all this money in his room when he was arrested, then there is a possibility that he has spent more than what is left. The image showing is the tomb of the former COCOBOD CEO’s mother which he used some part of the money to erect on the grave. This building, which looks more than a Trassaco building, is a cemetery which was bought and can be used to bury about forty (40) people but was used for a single person, his mother, and has erected a building on it. This building will cost more dollars when in Trassaco but it is being occupied by the remains of a dead person in a forest. This is a message from a viewer stating that this is Dr Opuni’s mother’s tomb in her village Babianeha in BA when people have no place to sleep….COCOBOD money…sad!

Gone are the days when children were guilty of petty stealing but today the adults have taken over. If there is any truth in the fact that this man has packed this amount of money in his room….Ghanians always talk about the money scandal involving Woyome, meanwhile someone has this amount stacked in his room and now that it has been seen, Woyome will start having a good night sleep because he now has a competitor who has spent more than he, Woyome. Ghana will be a better place now that Mr Martin is back to do his job. If we had thrice the money in Dr Opuni’s room in Ghana, there will be no poverty in Ghana. One individual has packed all this money in his room and is spending it, building big houses while our roads are in deplorable states and we’re experiencing instability in our energy sector. God is our helper.

With the charges leveled against him, he will soon be convicted like Abuga Pele who spent some small amount of money and was convicted for twelve years. These twenty-seven (27) charges against Dr Opuni will be very difficult to get away with and these charges might get him to serve a jail term of about three hundred years (300) years in prison or better still, one million years, God is our helper. We are waiting to see how it goes”.

Cosby’s Past Words On Sex Led To Conviction – Juror