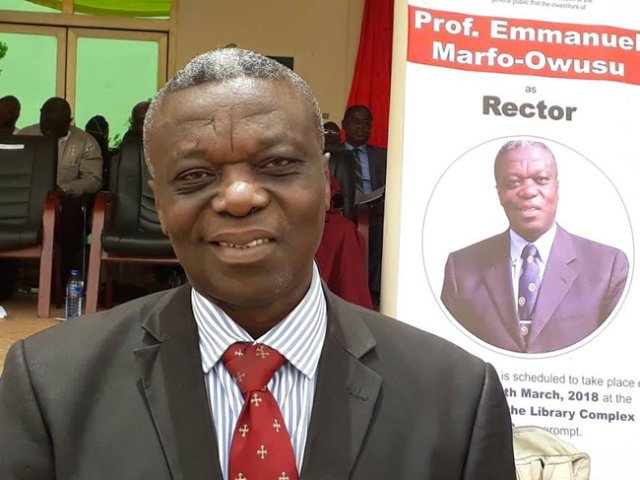 An expected showdown supposed to rise at the campus of Wa Polytechnic in the Upper West Region as the embattled Rector Prof. Emmanuel Marfo Owusu returns to campus today in defiance of workers protest and an interdiction order.

On Monday, aggrieved staff of the Polytechnic chased him out after mounting roadblocks to impound his car and prevent him from accessing his office.

Prof. Marfo Owusu has filed a fresh suit to halt his interdiction and probe into allegations of embezzling over GHC500,000.

According to him, his lawyers are returning to court to sue the Polytechnic for contempt.

“Of course I’ll be there, they can touch me if they want. I want to see the one who will be brave enough to come and touch me. I’m going there with the police, because I’m expected to be there, take care of the school in respect to signing the cheques for the students, signing for other officers that may need financial support to be able to do what needs to be done in the school, I’m not there only for the lecturers, I’m there for many people so it is important for me to be at work and assume my duties.

“If I leave them to do their own thing, the whole coffers will be empty, because in the morning I’d asked the bank SGSSB to freeze the account until they see my signature on any cheque and I’ve also asked Stanbic to also stop the cheques because they were taking money loosely and awarding themselves unnecessary amount of money which was not the best,” Prof. Marfo Owusu told Starr News.