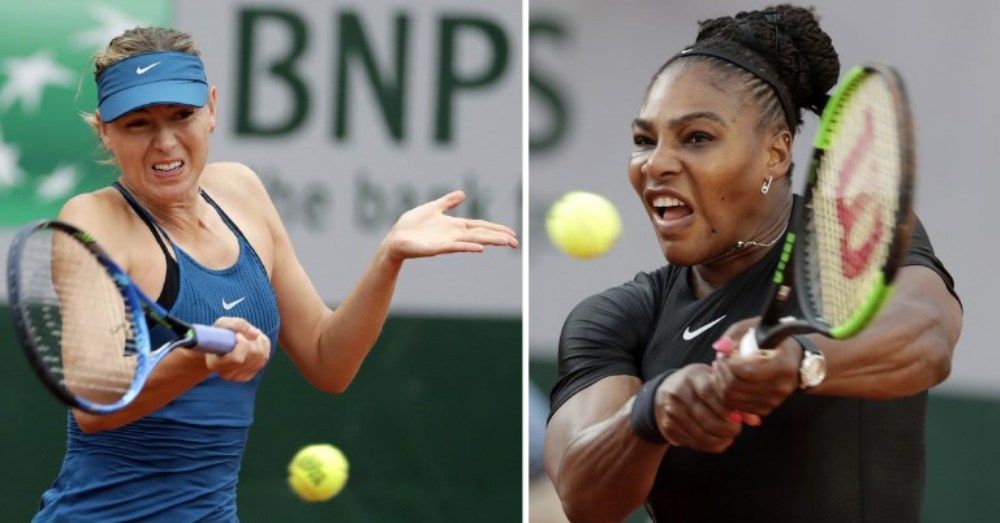 Serena Williams will be fired up to tighten her 14-year grip on Maria Sharapova by a sense of betrayal as the two iconic stars play out the latest chapter of their bitter feud at the French Open on Monday.

Sharapova has not defeated her fellow former world number one since 2004 — a streak of 18 matches — the same year she made her global breakthrough at Wimbledon as a slender teenager prone to fits of giggles.

The 22nd match of their one-sided rivalry will once again be played out against a familiar soundtrack of suspicion and bad blood.

Williams, the three-time French Open champion and 23-time major winner, has vented her anger at Sharapova’s claims that she had wept after losing the 2004 Wimbledon title match.

The 36-year-old described references to her in Sharapova’s memoir, ‘Unstoppable’, as “100 percent hearsay” while other revelations she dismissed as “not necessarily true”.

Williams is particularly angry as Sharapova’s claims came just months after the American had hailed her for the manner in which she announced her failed drugs test at the 2016 Australian Open.

“I was one of the few people that said she was brave to say something,” said Williams referring to Sharapova’s “drug incident”.

“I didn’t have anything negative to say about Maria.”

Sharapova’s test for meldonium led to a 15-month ban.

Ironically, the Russian’s last match before her suspension was against Williams in the quarter-finals in Melbourne.

Williams has monopolised their on-court clashes for the last 14 years so much so that Sharapova has taken just one set in a decade.

Despite that, the Russian, with five Slams to her name, still brings in the serious money.

Her net worth was valued at $285 million by Forbes last year while, according The Richlist, Williams’s financial assets were estimated at $170 million.

Elsewhere, as she rebuilt her reputation, Sharapova featured in a no warts at all Netflix documentary ‘The Point’.

Not to be outdone, Serena opened the doors to HBO for a four-part mini-series, ‘Being Serena’, focussing on her homelife and return to action after the birth of daughter Olympia.

As well as vying for commercial and PR supremacy, the two have fought very public battles over their private lives.

On the eve of Wimbledon in 2013, Williams gave an explosive interview to Rolling Stone magazine in which she left nobody in any doubt as to her target.

“She begins every interview with ‘I’m so happy. I’m so lucky’ ? it’s so boring,” said Williams without namechecking the Russian.

“She’s still not going to be invited to the cool parties. And, hey, if she wants to be with the guy with a black heart, go for it.”

The ‘black heart’ was a not so subtle reference to Bulgarian tennis player Grigor Dimitrov, a rumoured former boyfriend of Williams, who was then dating Sharapova.

“If she wants to talk about something personal, maybe she should talk about her relationship and her boyfriend that was married and is getting a divorce and has kids,” she said in reference to Patrick Mouratoglou, who is still Williams’s coach but was reportedly her boyfriend at the time as well.

The fall-out from that spat was still sending shockwaves through Wimbledon two years later when Mouratoglou said that Victoria Azarenka — a former world number one and close friend of Williams — was a better player than the Russian.

“I don’t think you’re ever going to hear nice words from him about me,” said Sharapova.

Meanwhile, adding even more spice to Monday’s duel in the dust at Court Philippe Chatrier is Williams’s assertion that Sharapova is almost obsessed by the American who is named more than 100 times in ‘Unstoppable’.

“I was, like, this is really interesting…I didn’t know she looked up to me that much or was so involved in my career.”

Monday’s match, which will be third on Court Philippe Chatrier, has already grabbed the attention of other players.

“I think the thing that makes Serena one of the greatest of all time is just she takes everything with the same fire, and everything she does, it’s always at an extremely high level,” said fellow American Madison Keys who has already booked her spot in the quarter-finals.

Kwesi Nyantakyi has not released any press statement – Shiekh Tophic