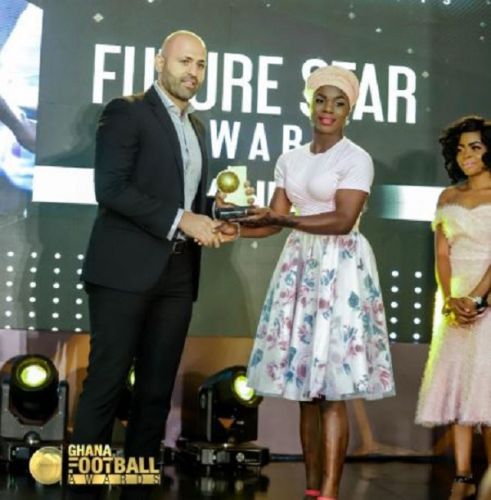 Former Black Maidens captain Mukarama Abdulai has been named Women’s Footballer of the Year at the just ended second edition of the Ghana Football Awards.

She also won the Rising Star award  at the Ghana Football Awards event held on Sunday in Accra. The event was well attended by dignitaries, local journalists, actors and Ghanaian football stars.

Highlight of the night was a spectacular performance by Ghanaian Highlife musician Kwesi Pee.

The 17-year-old was by far the most successful women’s footballer in the country for her stellar achievements.

She was awarded the 2018 FIFA U-17 Women’s World Cup Golden Shoe after scoring seven goals at the tournament.

The Northern Ladies player has also adjudged the third-best player at the tournament.

The 2019 Ghana Football Awards was held at the Accra Marriott Hotel.

Team Of The Year
Asante Kotoko

Goal of the Year
By Joseph Esso – Heart of Oak