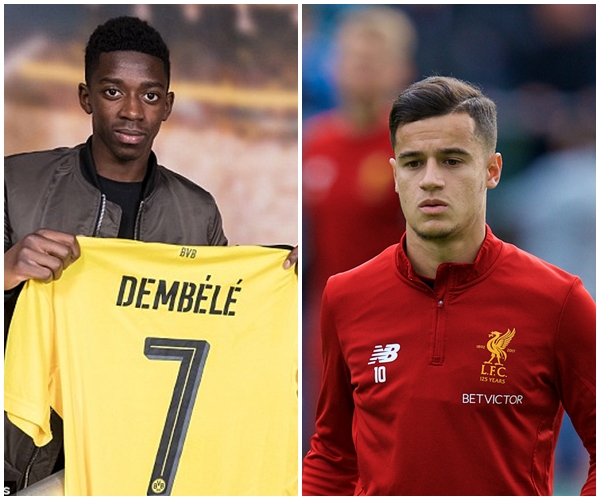 Barcelona has sent a delegation to Germany to try and negotiate a move for Ousmane Dembele before turning their attentions to Philippe Coutinho.

The Camp Nou outfit are hopeful a deal can be done for Dembele, though the sale of Neymar to Paris Saint-Germain has left them in a difficult situation.

According to Goal, Barca were initially quoted €90 million for the 20-year-old when they enquired as to his availability earlier in the summer, but Dortmund is now holding out for closer to €150m with the Copa del Rey winners having just come into €222m in the aftermath of Neymar’s departure.

The former Rennes forward shone during his first season in Bundesliga in 2016-17, scoring six league goals and assisting a further 13 in just 32 appearances.

Goal understands Dembele wants to leave Dortmund, and the player himself has fuelled speculation regarding his future by deleting all references to German club from his social media profiles amid reports he has already agreed to personal terms with Barcelona.

The Liga outfit is also keen to complete a deal for Coutinho before the end of the transfer window as they look to replace Neymar and also find an heir to Andres Iniesta.

Goal understands Liverpool will not sell at any price this summer and are not willing to negotiate, but Barca remain hopeful an offer of €110m could see them broker a deal for the Brazil international.

Barca has endured a quiet summer in the transfer window thus far, with Nelson Semedo’s €30m arrival from Benfica their one major outlay.