Media personality Nana Aba Anamoah has a sarcastic way of making it through social media attacks when it comes to her current status as a “born-one”.

The television and radio presenter has a son called Paa Kow Anamoah; whose father she has constantly refused to make public. She has revealed severally that she hasn’t spoken to the man in close to two decades and consequently has had no interest in revealing to the public who he is but it seems the cat is out of the bag already!

Despite keeping the father of her son a secret, Nana Aba is very close to Paa Kow and has often posted pictures of him on her social media pages with interesting captions with the latest being the most talked about.

Nana Aba’s recent photos of herself and her son uploaded to photo-blogging site Instagram was captured in a story online and it’s believed Nana Aba Anamoah had revealed an interview (in 2016) that she hasn’t spoken to her baby daddy in close to 16 years.

The report seems to have dragged out the baby daddy of the ace broadcaster from his hidden place and he is finally looking for ways to reunite with his son after so many years of neglect.

Did he really neglect his son or Nana Aba and her family decided to cut ties with him for good?

Known privately as Richard Brown, ‘Osebo‘ is an entrepreneur with an Italian fashion business. He lives in Italy with his family and revealed himself as Paa Kow’s father in a post on social media claiming he loves his son regardless.

In the Facebook post, Mr Brown who posted a photo from a headline he wasn’t happy with added a caption “Daddy luvs u so much my son. God knows I really do son.” 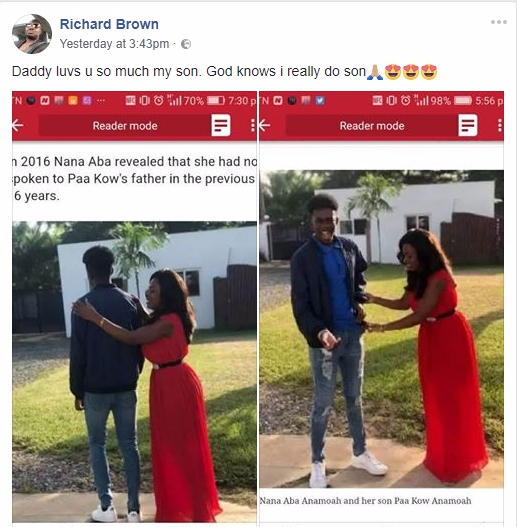 His post generated a lot of questions but he responded in the affirmative when asked: “if he was the new boyfriend or he’s truly the father…”

Meanwhile, there is no sign of the photos of Nana Aba and her son on her Instagram page anymore. More to come…

Telenovelas to be aired twice a week – FIPAG