THE TIMELY intervention of police officers at the Suhum circuit court in the Eastern Region saved the presiding judge, Audrey Kokovie Tay, from being attacked by a mob.

They were said to have disagreed with the judge regarding a ruling she had given on a case. 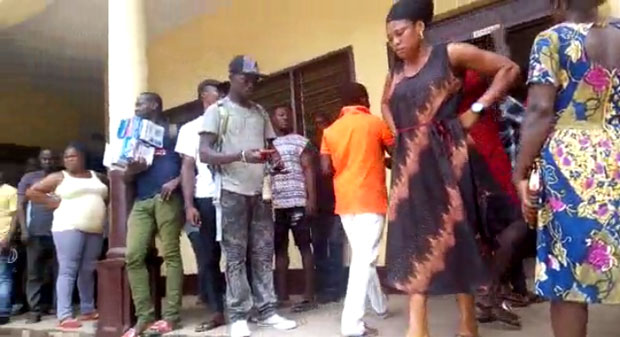 Ms. Kokovie Tay, who sensed danger, ran from her seat into her chamber before she was rescued by the police team and escorted to her private car to leave the court premises.

The judge was presiding over a case brought by the police against a fetish priest residing at Suhum-Amenhyia who reportedly knocked down three persons last week. She granted the suspect bail in the sum of GH¢50,000 with three sureties, but the bereaved families who were in court disagreed, wondering why the suspect was not remanded into police custody.

The deceased persons and the injured were sitting behind a fast food vendor by the roadside when the unregistered Toyota Camry with DVLA number (DV – 1256 A – 17) veered off its lane and ran into them. The fetish priest driver – a Rastafarian – ran into the bush to avoid being lynched after the accident.

After the accident, he was said to have sent one of his aides, Kwabena Daniel, who impersonated him (fetish priest) to turn himself to the police the following day. The imposter was arrested and charged with deceiving public officers.

The accused pleaded guilty when charged with the offence, candidly confessing that he was not the person driving the car when the accident occurred but was influenced by the main suspect, Solomon Adjoloo alias Raster, to claim responsibility for the accident to save him from prosecution because he (Solomon Adjoloo) did not have a driving licence.

DAILY GUIDE learnt that Solomon Adjoloo at about 5:40 pm on Tuesday accompanied by his lawyer, Leonard Sedzro, reported himself to the Suhum police and was arrested and arraigned before the court in the town.

Kwabena Daniel, who earlier pleaded not guilty to the charge of deceiving public officers, was granted bail in the sum of GH¢10,000.00 with one surety and was expected to re-appear on October 18 for the trial to begin.

Meanwhile, the bodies of the deceased have been deposited at the Suhum Government Hospital pending for autopsy.