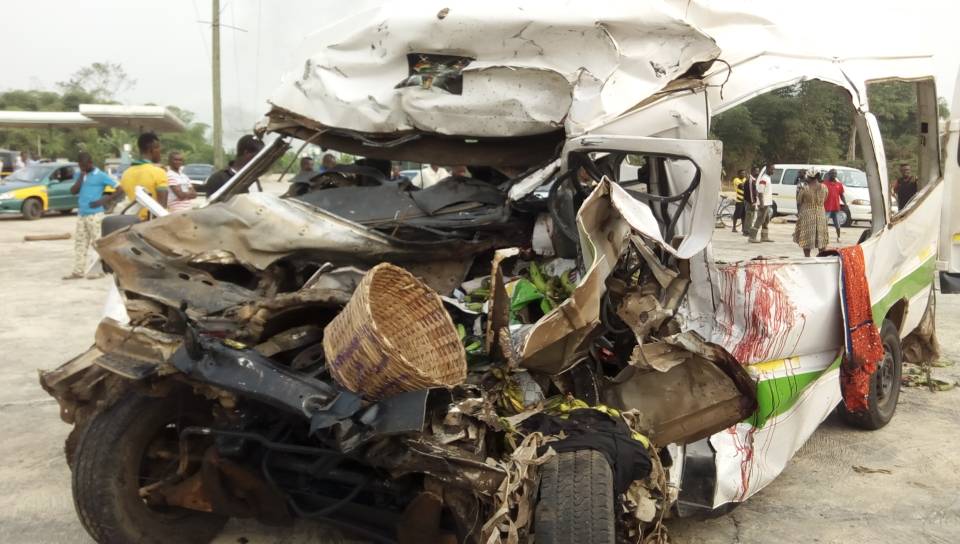 A gory road carnage near Anyinam in the Atiwa District of the Eastern Region has claimed the lives of 15 people.

According to the police, 14 of them, including five children below five years, died on the spot while one more person died at the hospital.

The 14 who died on the spot are said to be members of the same family from Nkawkaw in the Eastern Region, who were traveling to a funeral in the Greater Accra Region.

Two out of four people who survived the accident have been treated and discharged while the remaining two are still on admission at the hospital.

The Atiwa District Police Commander, Superintendent Eric Asiedu, told The Finder that the accident happened at about 11:30pm on Thursday, February 1, 2018, but the police got information in the morning of Friday, February 2, 2018, and rushed to the scene.

He said investigations so far have revealed that a Man Diesel truck with registration number WR 5783-C, driven by 35-year-old Adams Issah, was travelling from the Accra direction to Kumasi.

He explained that a Sprinter Benz bus with registration number GN 3699-14, driven by the late Akwetey, was traveling from Juaso in the Ashanti Region to Accra.

This Sprinter bus, with 14 passengers on board, also carried about 25 pieces of 2/4 lumber under the seats.

According to Superintendent Asiedu, the late Akwetey, driving the said Sprinter Benz bus and with 14 passengers onboard, decided to overtake the vehicle ahead of him, in front of the WAPCO filling station on the highway, near Anyinam.

He stated that while overtaking the vehicle, the Sprinter bus came face-to-face with the Man Diesel truck coming from the opposite direction, resulting in the head-on collision, killing all 14 passengers onboard.

The bodies have been deposited at the Nkawkaw Holy Family hospital.

Superintendent Asiedu noted that 35-year-old Adams Issah, who was driving the Man Diesel truck lost control and hit an ML Benz, with registration number GT 546-U, driven by 36-year-old Eric Agyei, and loaded with foodstuffs.

Eric Agyei and two other occupants of the ML Benz sustained serious injuries, but Eric Agyei later died at the Kibi Government Hospital while the other two remain on admission.

Adams Issah, who was driving the Man Diesel truck, and one other occupant also sustained injuries and were rushed to the hospital, where they were treated and discharged.

The three vehicles involved in the accident are severely damaged.
Supt. Asiedu, therefore, cautioned passengers to be conscious of the way drivers act behind the steering wheel.

“At the end of the day, it is your life that they are carrying. You can report to the police if they are driving carelessly.

“We are trying to coordinate with the Road Safety Commission and see whether some campaign can go on.

“Just last week, about 10 people died on the Suhum highway involving a VIP bus, and we are just in the second month of the year. Road users need to be extra careful,” he added.

Statistics from the Motor Transport and Traffic Department in the region indicate that a total of 1,233 accident cases were recorded in 2017 in the Eastern Region, with 1,732 vehicles involved, out of which 374 persons perished while 2,254 were injured as a result.