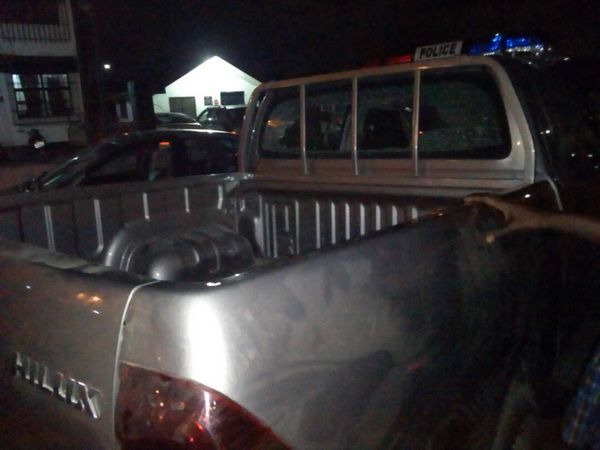 Two police vehicles have been taken out of service after some angry youth attacked it with bricks and stones at Katapor, a suburb of Pokuase, near Amasaman in the Greater Accra Region.

The incident happened on Monday when two police patrol teams responded to a call for assistance from a member of that community.

The two police vehicles were attacked after they had left the house of the man who had called for help and were conducting enquiries and patrolling the community.

A policeman who was part of the patrol teams had one of his fingers bitten off.

Briefing the Daily Graphic on the incident, the Public Relations Officer (PRO) of the Accra Regional Police Command, Assistant Superintendent of Police (ASP) Mrs Effia Tenge, said about 9:40 p.m. Monday, two police patrol teams, in response to a distress call, went to the house of a man identified as Torgbui Adama, who claimed he had been attacked by some youth of the community.

Torgbui Adama, who is said to be a fetish priest, told the police that the youth hit him on the head and legs with cement blocks and bolted as the police were approaching the scene.

In the course of patrolling the area after they had been briefed by Torgbui Adama, the police saw that people had massed up in the middle of the road leading to Pokuase from Amasaman.

She said when the police vehicles approached, the youth began throwing stones and cement blocks at them, breaking the side glasses and denting the body of the vehicles in the process.

In the midst of the commotion, a woman allegedly bit off the finger of one of the policemen.

Mrs Tenge said it took a reinforcement team of policemen to restore calm.

In the end, three policemen sustained injuries, including the one whose finger was bitten off, and were sent to the Amasaman Government Hospital by the reinforcement team.

Some of the youth who sustained injuries were taken away by their friends.

Not perturbed, the patrol teams continued with their patrol of the area and dismantled road barricades mounted by the riotous youth.

Preliminary investigations by the police, Mrs Tenge said, showed that the youth were in support of a rival fetish priest.

She said it was claimed that the youth did not want Adama in the community for allegedly condoning evil.

The police are yet to unravel the import of the youth’s claim, as all they could tell the police was: “He is wicked.”

In the course of the investigations, the police found out that Adama had fired some gunshots when the youth allegedly attacked him.

When the police searched Torgbui Adama’s premises, they found a pump action gun.

So far the police have arrested five of the agitating youth, comprising four men and the woman who bit off the policeman’s finger, while Adama has also been arrested for possessing a weapon without authority.