A former Tiger Eye PI staff is living in fear after the recent killing of his colleague, Ahmed Hussein-Suale.

The staff [name withheld] who is seeking protection, says his life is at ‘high risk’.

He made the shocking disclosure to seasoned journalist, Adakabre Frimpong Manso in an exclusive interview.

According to him, he was abducted by his Tiger Eye PI staff to an uncompleted building at Tse-Ado a suburb of Accra and gun shots were fired in his face just to scare him.

He mentioned one Tiger Eye PI member named Muda as the gang leader who abducted him from his home in Accra and took him to a construction site at Tse-Ado owned by Anas Aremeyaw Anas.

According to him, his former boss, Anas Aremeyaw Anas suspected that he has been divulging information about their work to Kennedy Agyapong.

He also told Adakabre that, upon reaching Anas’ uncompleted house, the gang leader, Muda took out his pistol and fired 3 loud warning shots over his head.

“I started screaming and asked why they want to kill me but nobody answered me,” he recounted.

According to him, he also received life-threatening text messages from Anas’ wife and Anas PRO, one Saddick Abubakar that he will die if anything happens to Anas Aremeyaw Anas because of his alleged association with Kennedy Agyapong to tarnish the reputation of the award winning investigative journalist.

“Anas’ wife told me point blank that she will make sure I die if anything happens to Anas,” he narrated to Adakabre.

According to him, the threats began when Kennedy Agyapong started revealing serious ‘deadly secrets’ about Anas and his Tiger Eye team.

The gentleman is currently under witness protection helping to unravel the circumstances surrounding the death of his colleague in Ahmed.

More details of the startling disclosures made to Adakabre coming up in subsequent write-ups. 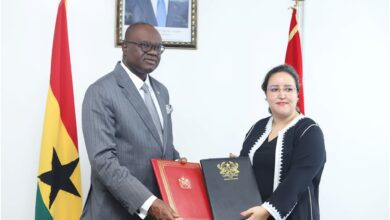 NDC organized 318 press conferences in 2017 to solve nothing – MP