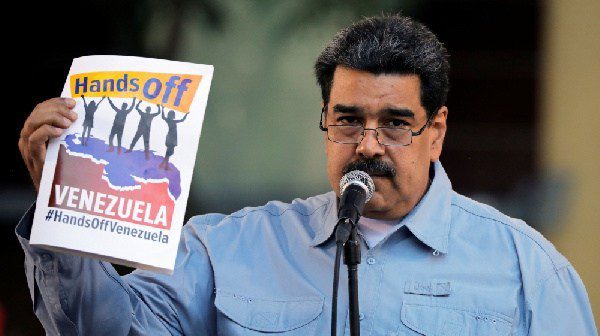 Venezuela has plunged into a major political crisis amid a growing row over President Nicolas Maduro’s future as the country’s leader.

Shortly after Guaido took an oath swearing himself in, US President Donald Trump publicly recognised him as the country’s leader. In response, Maduro broke off diplomatic ties with the United States and gave US diplomats in the country 72 hours to leave.

Venezuela’s Foreign Minister Jorge Arreaza has announced the formation of a group that believes the UN Charter’s commitment to non-interference in another country’s affairs is being violated, particularly in the South American nation.

He told reporters at UN headquarters in New York on Thursday there were many more supporters.
Venezuela official calls US aid a ‘spectacle’

Venezuela’s Foreign Minister Jorge Arreaza says that “the momentum of the coup that the government of the United States was promoting is over – it didn’t happen”.

He told reporters at UN headquarters in New York on Thursday that the US needs to rethink its strategy because “the loyalty of our armed forces has already been proved”.

Arreaza dismissed a February 23 deadline set by self-declared president Juan Guaido to bring badly needed food and medicine into Venezuela, saying the opposition leader doesn’t control a single policeman and “whatever he says is absolutely absurd”.

He said President Nicolas Maduro controls the government and is the only one who can give deadlines. Maduro is blocking the aid, saying that Venezuelans are not beggars and that the move is part of a US-led coup.

Arreaza called the assistance a “spectacle that the US is organising” and denounced US sanctions against Venezuela.

“The US has blocked our economy,” he said. “The cost of this blockade is over $30bn – and they are sending this so-called humanitarian aid for $20m. So what is this? I’m choking you, I’m killing you, and then I’m giving you a cookie? So that’s a show.”

Venezuela’s chief prosecutor says he’s launched an investigation into opposition leader Juan Guaido’s appointment of a transitional board of directors for the state oil company.

Saab says he’s investigating the board members designated to oversee PDVSA and its Houston-based subsidiary Citgo. He calls the appointments by Guaido and the National Assembly a “circus.”
Guaido has also appointed several ambassadors, including a representative to the United States.