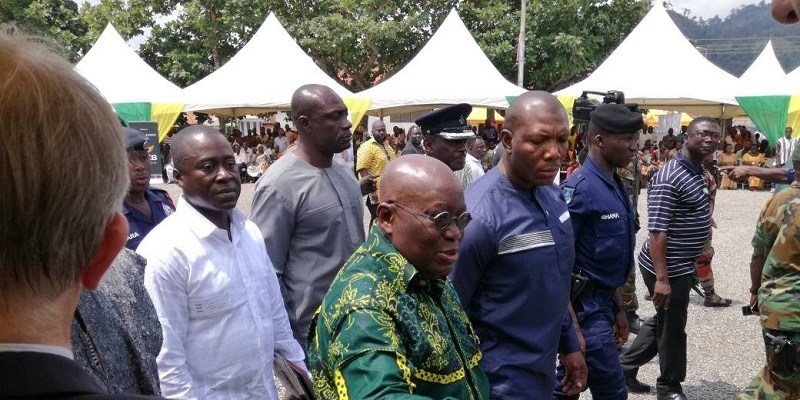 President Nana Addo Dankwa Akufo-Addo says Ghanaians will soon enjoy the wealth of the country and not regret for voting him into power since Ghana is a rich nation.

He added that his government was putting measures in place to develop the country.

The President said this at a durbar to mark this year’s Ohum Festival at Kyebi in the East Akim Municipality of the Eastern Region on Saturday under the theme, “Taking Charge of Our Environment.”

“Ghana is not a poor country, rather a rich country. We are initiating measures that will soon improve the living standards of the citizens for Ghanaians to realize that indeed we are sitting on money,”

President Akufo-Addo, who received applause from the gathering, posited that his appointees were very knowledgeable and competent to help him build a prosperous country.

He called on Ghanaians to pray for him to have good health and strength to enable him execute his plans for Ghana.

The President, who has declared war against illegal mining, reiterated his government’s commitment to bringing an end to the menace of illegal mining that has caused destruction to water bodies and the environment.

He stated categorically that he would not allow the illegal miners to destroy the environment with impunity, but ensure that the environment is protected for the future generation.

He, however, explained that he was not against mining but illegal mining due to its negative effects on the environment.

The Okyenhene, Osagyefuo Amoatia Ofori Panin, who spoke earlier, called on President Akufo-Addo to ensure that Ghanaians do not continue to wallow in abject poverty and ensure that poverty doesn’t become a hindrance for any Ghanaian child to education.

Okyenhene called for protection of the environment from degradation and depletion, adding that Akyem Abuakwa has the potential to become ecotourism destination in Ghana.

According to the Overload of Akyem Abuakwa Traditional Council, the ecotourism potential of the Atiwa rainforest and its ability to save the world from debilitating effects of climate change have attracted international attention, hence the need to conserve the forest reserve.

Okyenehene said that “there is no doubt that ecotourism has a great potential in Akyem. The Equatorial rainforest is the cynosure of the Western World, and now the focus of considerable environmental attention for its real and perceived ability to save the globe from self-destruction.

Osagyefuo Amoatia Ofori Panin, who spoke briefly, hinted that “some of you may know of my role in this regard, and the fact that I sat on the Advisory Board of the Princes Rainforest Project (PRP), an initiative by Prince Charles of Great Britain to protect the World’s rainforest, that’s the fraction that is left of it”.

The President of the Eastern Regional House of Chiefs, who protested against bad roads during the previous NDC administration, appealed to the President to repair the deplorable roads, especially in the region and across the country to boost business activities.

The Okyenhene entreated President Akufo-Addo to check some of his appointees, who are becoming disrespectful in his government.