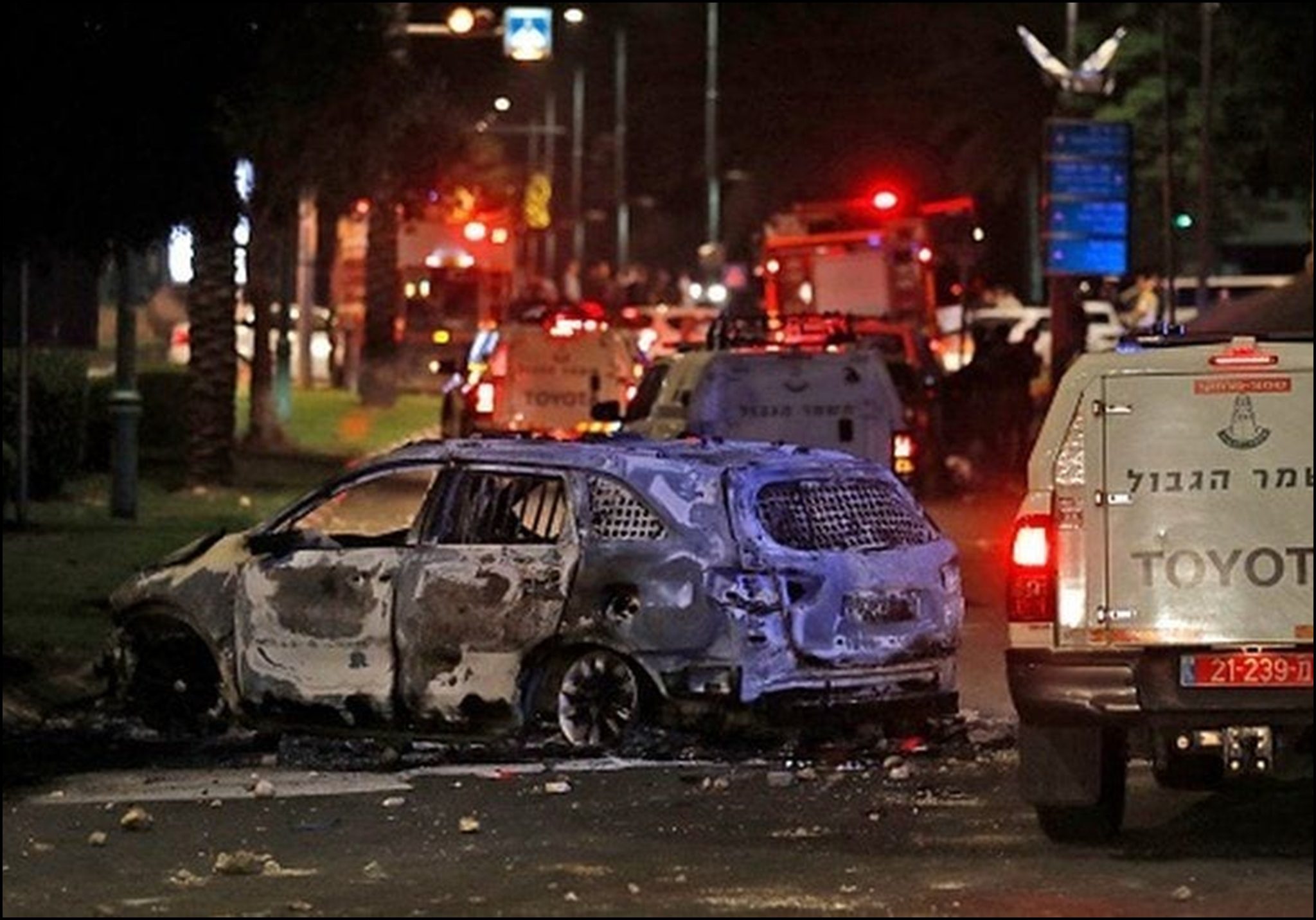 Israel has declared a state of emergency in the central city of Lod after rioting by Israeli Arabs, as the conflict between Israeli forces and Palestinian militants intensified.

Cars were set alight and a father and daughter – both Israeli Arabs – died when a rocket from Gaza hit their car.

At least 40 people have died in some of the worst violence in years.

Israel’s military says it is targeting militants in Gaza in response to rocket attacks on Jerusalem and other areas.

More than 1,000 rockets have been fired towards central and southern Israel by Palestinian militants since Monday evening when hostilities suddenly escalated, the Israeli army said.

The Palestinian militants said they targeted the Israeli city of Tel Aviv after an Israeli airstrike demolished a tower block in the Gaza Strip on Tuesday.

A second tower block collapsed in the territory after another Israeli strike.

Residents were warned to evacuate the 12-storey al-Jawhara Tower. However, health officials say there were still civilians deaths.

More than 200 rockets were fired at Tel Aviv and Beersheba after the tower attack, Palestinian militants said

The fighting came after weeks of rising tensions that were stoked by violent confrontations between Israeli police and Palestinian protesters at a site in Jerusalem that is holy to both Muslims and Jews.

The international community has urged both sides to end the escalation. The UN’s Middle East peace envoy, Tor Wennesland, said they were “escalating towards a full-scale war”.

At least 35 Palestinians, including 10 children, and five Israelis have been killed in the violence so far, according to health officials and medics.

What happened in Lod? 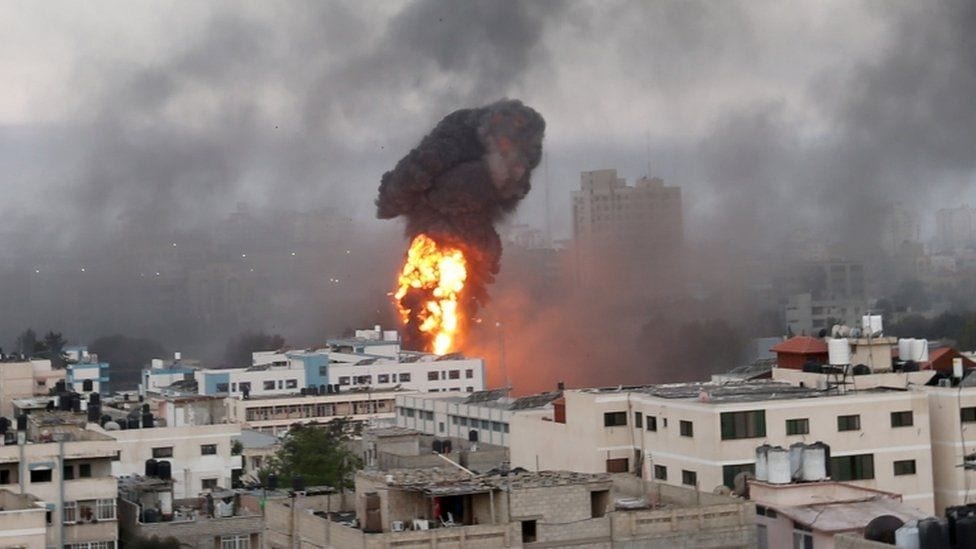 Protests by Israeli Arabs broke out in Lod, a city near Tel Aviv, and escalated to full-scale rioting, with protesters throwing rocks at police, who responded with stun grenades.

The protests followed the funeral of an Israeli Arab man who died during unrest in the city a day earlier.

At least 12 people were injured in the clashes, Israeli newspaper Haaretz reported. As night fell, the situation degenerated in Lod, police said.

On Wednesday morning, a 52-year-old father and his 16-year-old daughter were killed when a rocket fired from Gaza hit their car, also seriously injuring the mother, according to the Times of Israel.

Israeli media reported that synagogues and several businesses had been set on fire, while Reuters news agency said there were reports of Jews stoning a car that was being driven by an Arab resident.

On Tuesday night, Israeli Prime Minister Benjamin Netanyahu declared a state of emergency in Lod. Israeli border police have been brought in from the West Bank.

The Times of Israel said this was the first time the government had used emergency powers over an Arab community since 1966.

The conflict between the Israeli military and Palestinian militants in Gaza has stirred unrest among the Arab minority inside Israel, leading to protests.

There has also been unrest in other cities with a large Israeli Arab population, as well as in East Jerusalem and the West Bank.

“All of Israel should know, this is a complete loss of control,” Lod Mayor Yair Revivo was quoted as saying by the Times of Israel newspaper. “Civil war has erupted in Lod.”

Mr. Netanyahu, who went to the city to call for calm, said he would impose a curfew if necessary.

What do we know of the latest fighting? 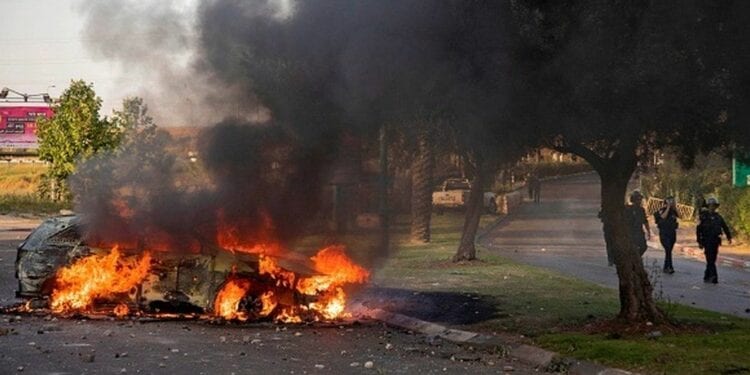 After two days of hostilities, rocket fire by Palestinian militants and airstrikes by the Israeli military continued unabated on Wednesday morning.

In a tweet, Israel’s military said it had struck “a number of significant terror targets” across the Gaza Strip in response to hundreds of rockets. The strikes were the biggest since 2014, it said.

A high-rise building, homes, and offices used by Palestinian militant leaders in Gaza were among the targets hit by fighter jets, Israel’s military said.

For days, Palestinian militants have been launching hundreds of rockets towards Israeli cities in an apparent attempt to overwhelm missile defenses.

Earlier on Tuesday Hamas, the militant group that rules Gaza, said it had launched rockets at Tel Aviv and its suburbs in response to “the enemy’s targeting of residential towers”.

Video footage from the city shows rockets streaking through the night sky, some exploding as they are hit by Israeli interceptor missiles.

In the Tel Aviv suburb of Holon, a rocket hit an empty bus, Israeli police spokesman Mickey Rosenfeld told AFP news agency. A girl of five and two women, one 50 and one 30 were injured in the town.

Ben Gurion airport briefly halted flights on Tuesday and an energy pipeline between the cities of Eilat and Ashkelon was hit.

The rockets were launched after the destruction of the Hanadi Tower in Gaza, which houses an office used by the political leadership of Hamas.

“Terror organisations have been hit hard and will continue to be hit because of their decision to hit Israel,” he said. “We’ll return peace and quiet, for the long term.”

“If [Israel] wants to escalate, we are ready for it, and if it wants to stop, we’re also ready,” he said in a televised address. “There is a new balance of force.”

What has caused the violence? 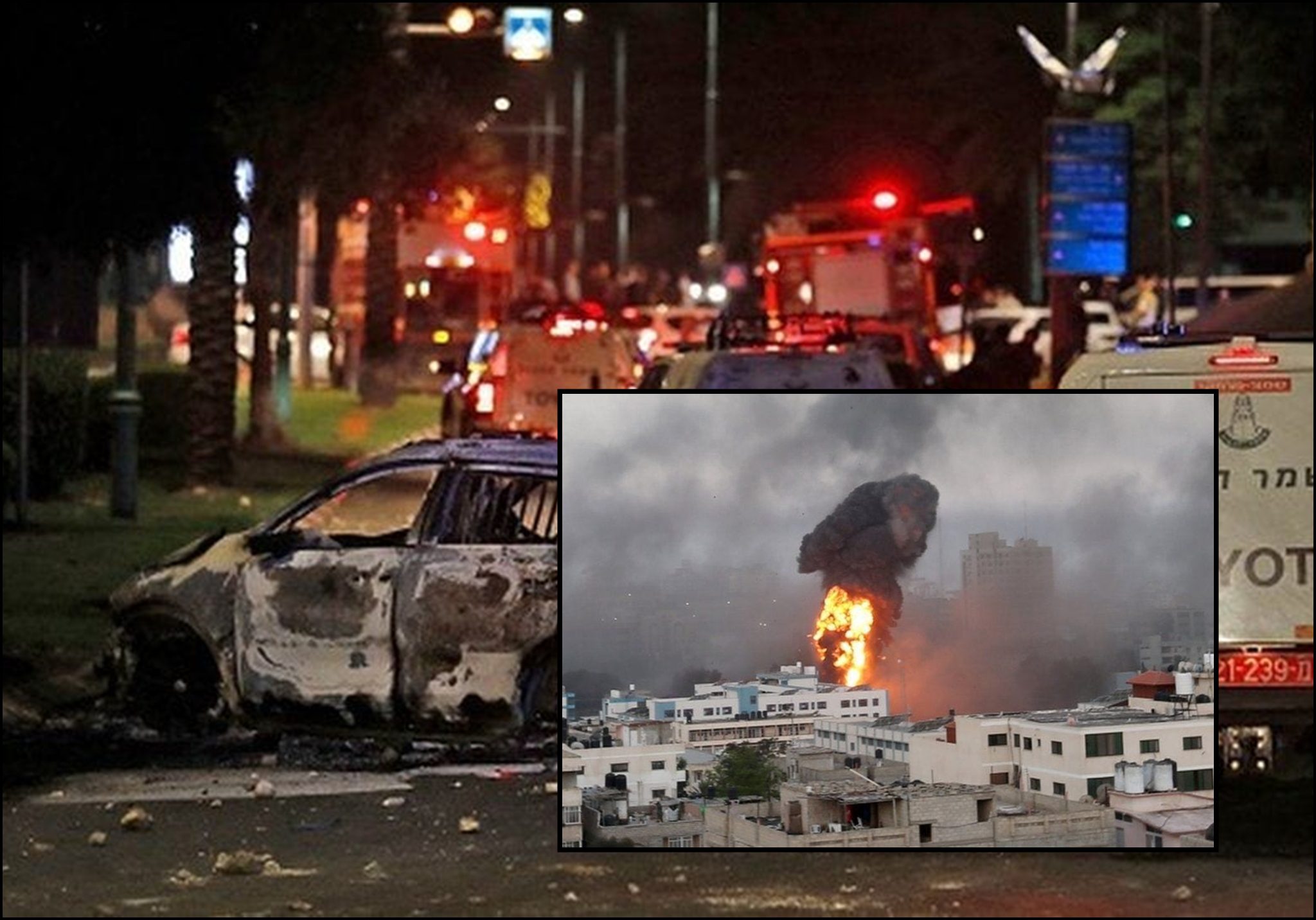 The fighting between Israel and Hamas was triggered by days of escalating clashes between Palestinians and Israeli police at a holy hilltop compound in East Jerusalem.

The site is revered by both Muslims, who call it the Haram al-Sharif (Noble Sanctuary), and Jews, for whom it is known as the Temple Mount. Hamas demanded Israel remove police from there and the nearby predominantly Arab district of Sheikh Jarrah, where Palestinian families face eviction by Jewish settlers. Hamas launched rockets when its ultimatum went unheeded.

Palestinian anger had already been stoked by weeks of rising tension in East Jerusalem, inflamed by a series of confrontations with police since the start of the Islamic holy month of Ramadan in mid-April.

It was further fuelled by an expected court ruling on the fate of the families in Sheikh Jarrah – ultimately postponed because of the unrest – and Israel’s annual celebration on Monday of its capture of East Jerusalem in the 1967 Middle East war, known as Jerusalem Day.

The fate of the city, with its deeply religious and national significance to both sides, lies at the heart of the decades-old Israel-Palestinian conflict. Israel in effect annexed East Jerusalem in 1980 and considers the entire city its capital, though this is not recognised by the vast majority of other countries.

Palestinians claim the eastern half of Jerusalem as the capital of a hoped-for state of their own.