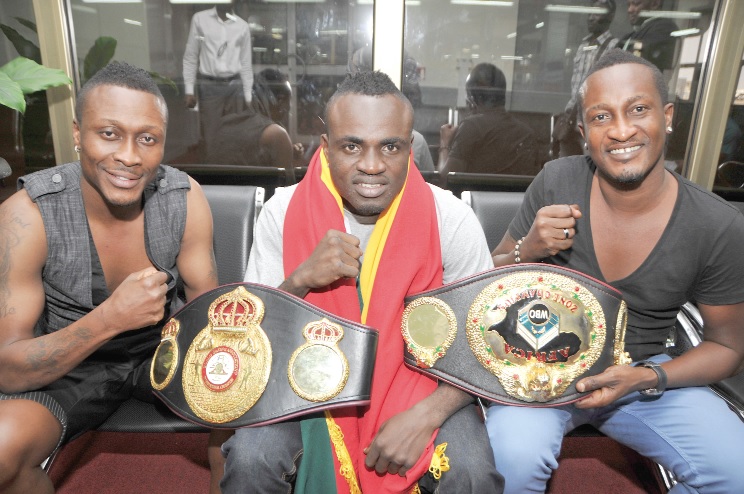 The boxer who was fumed with anger in an interview with Rainbow Sports, threatened to beat the firebrand sports presenter to pulp, wherever he meets him.

The undefeated boxer who is referred to as the King of Boxing, and with BabayJet Promotions, described Country Man Songo as a mentally challenged man who smokes Indian hemp.

The sports presenter had reportedly slammed the boxer and Babayjet Promotions adding, the boxer does not fight with strong fighters because he was weak.

Country Man Songo according to media reports, challenged the promoters to find the boxer a stronger opponent to challenge him.

But speaking in an interview on Total Sports Review, on Rainbow Radio 87.5Fm, Emmanuel Tagoe, warned the presenter to stop attacking him verbally since he was not one of those he’s been attacking on his show.

He said, the presenter who thrives on sensationalism to denigrate people should not use Emmanuel Tagoe as one of those personalities he attacks, I will not tolerate it at all.

‘’That Country Man Songo who sit on Radio and television to insult people with the aim of entertaining people; he speaks anyhow and attack people without respect.

If my boss Baby Jet due to respect has not responded to his utterances due to his [BabyJet’s] level; if he insults the likes of the Coach of the Black Stars and they don’t mind him, he should not bring that to my doorstep.

We the boxers are crazier then he [Songo] is.

He should not be insulting me on his show and claim that I am not strong.

If I am weak, can he fight me? We the boxers are crazier than he is.

I will not entertain his insults. He smokes wee to behave the way he does and aside that, he gets people to support him.

He should concentrate on the Black Stars, he should not do that to boxers.

I don’t blame him; I blame those who gave him the opportunity to host their show.

I will beat him wherever I meet him.’’