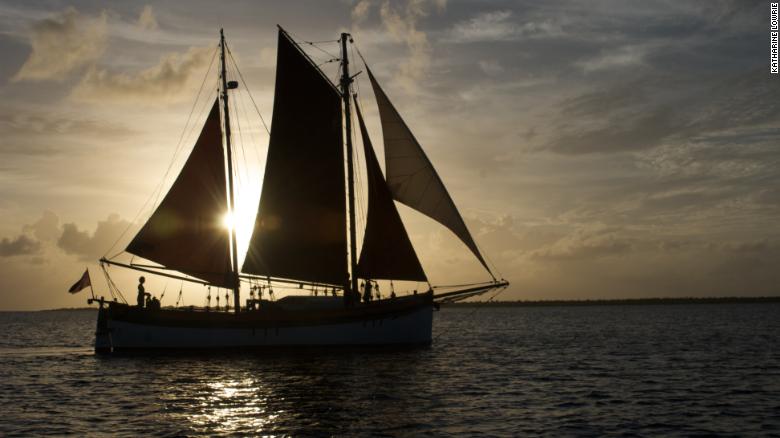 British couple Katharine and David Lowrie were newly weds who had just turned 30 and wanted to work in nature conservation.

So why not sail the world?

“We both care hugely about the natural world, and David comes from a sailing background, so suggested we should sail, use the power of the wind, rather than fossil fuels,” Katharine told CNN.

“I had never sailed, my maiden name was Land. I was scared.”

Although both were on a career path, David as a management consultant for accountancy firm Accenture and Katharine as an ecologist for the Royal Society for the Protection of Birds, the increasing lack of work-life balance prompted them to quit their steady jobs and go exploring instead.

David had spent his childhood sailing with his parents off the coast of Britain and the North Sea, aboard modern yachts, but he had never skippered a boat.

“I completely trusted him,” said Katharine. “I had never sailed — a couple of dinghy episodes before we set off. I would learn on the go.”

Following their run, the couple went back to the UK for a short break, during which Katherine gave birth to their first child. They returned to Lista Light in January 2015.

The Lowries finally arrived back home in Falmouth, south west England in August of that year, following a two-month long Atlantic crossing from Cabedelo, Brazil with their baby son Theo, who had lived aboard the boat from the age of three months to almost a year.

“Babies are amazing,” said Katharine. “Very versatile. We had a full medical kit, our doctor provided us with antibiotics. We had an area under the table that we fenced off so it was Theo’s play zone and safe zone, so we could run up and work together when necessary and know he was safe.”

Lista Light also had wooden planking all around the boat for safety.

“We let him walk and crawl around on deck when it was calm, but one of us was always close,” said Katharine. “His balance was amazing — he could stand up holding on to the swaying fencing.”

Sailing with an infant came with its very unique set of challenges.

“We used reusable nappies, I washed them by hand and dried them in the rigging,” Katharine said. “They dried very quickly in hot climates. Conventional nappies don’t really work as most boats don’t have enough space to store them and also they stink!”