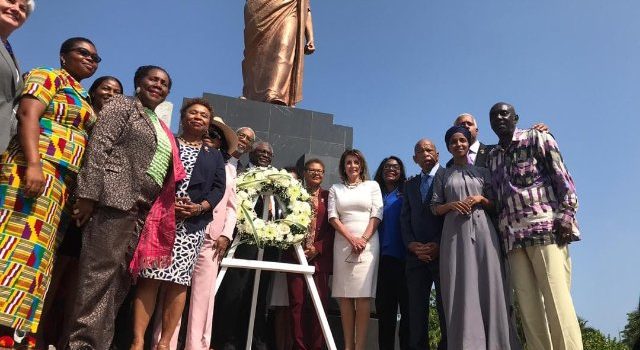 US Politician and Speaker of the House of Representatives, Ms Nancy Pelosi, has visited the Kwame Nkrumah Memorial Park in Accra.

The highest-ranking elected woman in United States history, Nancy Patricia Pelosi and delegation on Monday afternoon July 29 2019, laid a wreath at the Kwame Nkrumah Memorial Park on behalf of the government and people of US and signed the book of condolence.

She arrived at the museum with a Congressional delegation and was welcomed by the Director of the Memorial Park, Alhaji Abubakari Issah Osman.

Nancy Pelosi with the help of the delegation laid the wreath at the statue of Dr Nkrumah.

After a brief interaction and photo-taking, she walked into the mausoleum which has the remains of Dr Nkrumah and his wife Fathia. There inside the mausoleum, she signed the book of condolence.

After that, she visited the museum which also houses the personal effects and publications of Dr Nkrumah.

Nancy Pelosi and her delegation touched down at Terminal 3 of the Kotoka International Airport, Sunday afternoon.

They were met by the US Ambassador to Ghana, Stephanie S. Sullivan and the Speaker of Parliament, Mike Aaron Oquaye and some members of Parliament, as well as other dignitaries, were also at the Airport to welcome them amid a rich Ghanaian cultural display.