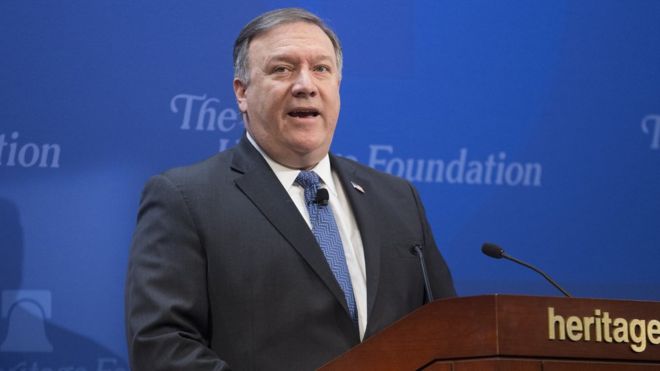 Secretary of State Mike Pompeo has said the US is imposing the “strongest sanctions in history” on Iran.

In a speech in Washington, America’s top diplomat said Iran would be “battling to keep its economy alive” after the sanctions took effect.

He said he would work closely with the Pentagon and regional allies “to deter any Iranian aggression”.

Earlier this month, President Donald Trump took the US out of the landmark 2015 Iran nuclear deal.

In his first major foreign policy speech as secretary of state, Mr Pompeo unveiled the administration’s “Plan B” for countering the Islamic republic on Monday.

He laid out 12 conditions that Washington would need to be met for any “new deal” with Tehran, including pulling all its forces out of Syria and ending support for rebels in Yemen.

Mr Pompeo said relief from sanctions would only come when Washington had seen a real change in Iran’s policies.

“We will apply unprecedented financial pressure on the Iranian regime,” he said.

“The leaders in Tehran will have no doubt about our seriousness.

“Iran will never again have carte blanche to dominate the Middle East.”

Following President Trump’s decision two weeks ago to withdraw the US from the Obama-era Iran nuclear deal, the US Treasury said economic sanctions would not be re-imposed on Tehran immediately, but would be subject to three-month and six-month wind-down periods.