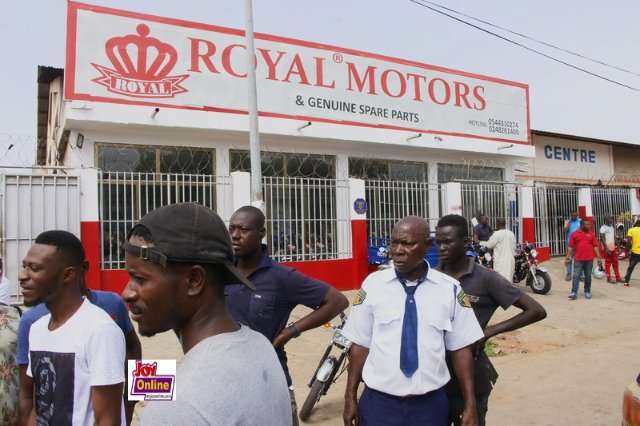 At least 4 armed men have stormed Royal Motors, an automobile company in Accra, making away with the company’s sales in a stunning daylight robbery Tuesday morning.

Eyewitnesses reported the robbers trailed a bullion van that had entered the Industrial Area premises of the company to collect the company’s sales made the previous day.

The van dropped off a cashier who was detailed to count the money and later contacted the driver to come pick him up.

Soon after, the suspects in a car drove into the premises. They attacked a security man in his cubicle, took his phones and roughed him up.

While at this, one of the suspects entered into the secretary’s office under the pretext of negotiating the purchase of a motorbike.

Although the conversation was meant to distract the secretary, it was the beatings outside that finally caught her attention.

But before she could seek help for the security man, her potential customer-turned-actual-robber, threatened her as the other suspects wore masks and stormed the office.

They fired guns, destroyed glass windows and snatched 8,000 cedis from the secretary’s office.

The robbers also entered another room where cash from the previous day was being counted. They attacked the cashier, took the money and destroyed a CCTV camera.

They took the damaged CCTV camera away along with the undisclosed amount of money.