Latest information emanating from the controversial IT project undertaken by the Social Security and National Insurance Trust (SSNIT) indicates that, labour unions had no clue about the project that their contributions were funding. 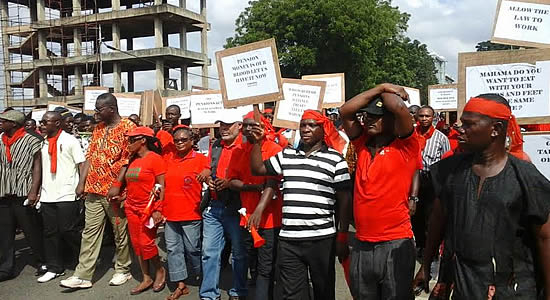 According to General Secretary of the Industrial and Commercial Workers Union (ICU), Solomon Kotei, all four representatives from organised labour on the Board of SSNIT, never reported on the award of the Operational Business Suite (OBS) project.

The OBS project which was undertaken by Silverlake and Perfect Business Systems in 2012 according to SSNIT, is meant to provide customers with convenient services.

Organised labour, which has 22 national unions, has four representatives on the 12-member Board of SSNIT which also includes the Director-General of the Trust.

The Social Security and National Insurance Trust (SSNIT) is a statutory public Trust charged under the National Pensions Act 2008 Act 766 with the administration of Ghana’s Basic National Social Security Pension Scheme and to cater for the First Tier of the contributory three-tier scheme. The Trust is currently the largest non-bank financial institution in the country.

Many have questioned the processes through which the OBS contract was awarded and whether Ghanaian workers, who are contributors to the Trust, were aware of the project which was funded with their investments.

Speaking Tuesday on the Super Morning Show on Joy FM, Mr. Solomon Kotei said none of the four representatives of labour unions on the Board at the time which included then Secretary General, Kofi Asamoah, provided feedback on decisions taken by the Board in respect of the project.

According to him: “There’s no feedback; there hasn’t been any feedback from them,” Mr. Kotei told host of the show, Kojo Yankson.

New Secretary General of the Trades Union Congress, Dr. Anthony Yaw Baah, who took office in August last year, has yet to convene a meeting on the scandal which has dominated media discussion.

“We have no idea [and] our members keep calling…keep demanding and we are in the dark,” he said.
The ICU Secretary General is, however, hopeful a meeting would be called “in the coming days” for the unions to state their position on the matter.

A Plus is just greedy and corrupt - Abronye DC

Don’t compare me to Sarkodie – D-Black