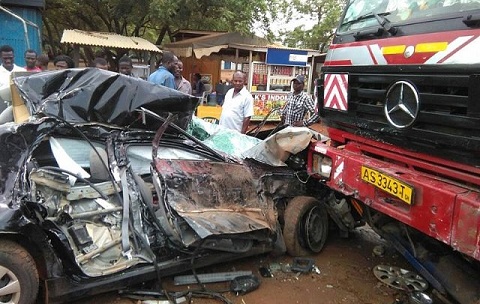 Some 2,076 people were killed in road accidents across the country in 2017, the National Road Safety Commission has revealed.

According to data released Tuesday, 12, 843 road accidents were recorded in the country, an increase of 2. 66 percent from the 2016 calendar year.

Out of the total number of accidents recorded 12, 166 sustained critical and minor injuries.

Addressing a news conference on Tuesday, Chief Executive Officer of the National Road Safety Commission, May Obiri Yeboah disclosed that 180 persons have already lost their lives in January 2018, an increase of 14.3% from the same period in 2017.

She added that over 1,181 people have also sustained injuries in various accidents since the beginning of the year.

In all 3, 300 pedestrians were knocked down while private vehicles topped the list of vehicles involved in accidents in the country in 2017.

According to Obiri Yeboah, 8,877 private vehicles were involved in accidents with, 8,080 commercial vehicles recorded.

Obiri Yeboah added that situation is quite alarming and called on Ghanaians to wary on the road and drive with maximum caution.