It’s been a journey since Ghana’s best rapper Sarkodie announced his feature with fast rising hip hop acts TeePhlow, Medikal, Strongman, Koo Ntakra, Donzy & Pappy Kojo. I watched the video Sunday night. The responsible blogger in me felt a need to post about it yesterday, but I just couldn’t. 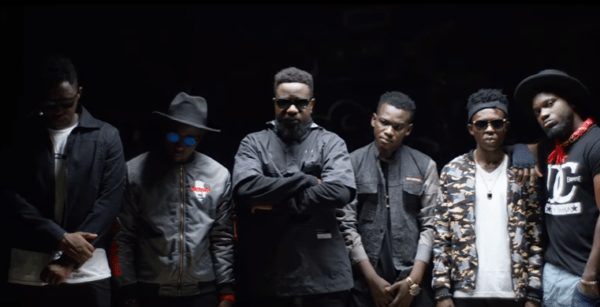 Sark himself might appreciate that hesitation even while it bugs the heck out of him. Trumpet is Sarkodie’s new nine minute music video that happens to be a cypher although he didn’t mention it back in his interview after Rappherholic launch.

He featured these fast rising act because he’s a source of motivation for many young hip hop acts and it felt like another publicity stunt– to call himself The Highest… truth is Sarkodie is just what is it, THE HIGHEST!

Knowing that he’s got some big, serious project “Sarkoholic Concert” in the offing inspires both anticipation and a little bit of dread. I know it’ll be an intricately constructed piece of work with a moments of astonishing beauty. It might be provocative. It might be a little unending. It’ll almost definitely attempt to grapple with the entirety of who Sarkodie has become in his own mind as well as in the public eye, and it’ll likely be exhausting and thrilling.

The luxe shot, filmed in a studio fills up the moment by raising his hood to the Prince Dovlo directed music video for Trumpet. He’s spent so much of the last decade trying to be two things at once: the embodiment of a hip hop star and a singular artist. He wants immediate celebration, but he also wants thoughtful, considered artistic appraisal. Whilst he gave time to stay on the hook, his sentiments actually read like an embarrassed retraction of all the bile he threw at an ex on his musically masterful, ethically record Revenge Of TheSpartans.

On that song, he had nothing but rage for the “stupid wannabees” who broke his heart with pretense. Here in Trumpet, he finally shows some of the self-awareness that comes with time: “If nobody will recognise me, I’ll blow my own trumpet (Translated from Twi).” That endlessly requoteable chorus has legs, and Sarkodie’s arrangement of rap for the ‘boys’ locates a warmth he’s been missing lately.

Is it rap? Or just a vanity project? The music is surprising and compelling. Sark has an eye for interesting, slightly off-balance compositions, and seems to value steady, patient editing. Carefully arrangement on the song was indeed good although at a point I felt Kofi Kinaata could have rapped too. Trumpet is beautiful and interminable, and I watched the whole thing more than once.

Quite interestingly, Teephlow begins to unleash ego right after Sarkodie, cementing his name on the Fortune Dane beat. Such a wild approach to nail the song with embattling lyrics. Medikal who came next to clear the rumours revealed that AMG Business and SM4Life members are still in good terms didn’t disappoint as well.

These two artistes are just in their “menses” with rap! Mixing comic metaphysics with metaphor, adds a bit of humor to their rap.

Lonely keys plinks gradually launching a rap attack from Strongman and Koo Ntakra who both settled in the space to score hood points clearly showing ‘they are best’ from – The south and East. Strongman’s usual consistency was no doubt but Koo Ntakra has just graduated from the old school to new school and there’s more room for improvement although he slowed the motion of the Trumpet slightly..

Find company amid string whooshes and beautifully melodic puddles of bass emerges the ‘Taadi Brafour’ who is spotted in chains exchanging unforgettable bars and attitude… Pappy Kojo goes a length rather than his usual kick-to-kick back rap style. His prison styled appearance connotes his second geniuses, another Fante rap god to be.

And after new buddy Pappy Kojo gets done his gentle snarl of a guest verse, Sarkodie returns with the sort of resigned singsong, finally ripping away from the bravado he shows so well. The final part of the video might just reference M.anifest’s punch “knodding his head like a lizzard – agama” but it’s rather the unsatisfied beast in them that brought out the Ghanaian thug attitude.

The inclusion of these new guys, and the design obsession, and all of the references to contemporary artists link it back to Sarkodie’s Twitter feed , which in this context starts looking like not just the highly entertaining ramblings of a star with enough time and money on his hands to indulge his every whim and enough intelligence to comment on that indulgence at a constant clip, but a training course for understanding the references he would throw into Trumpet.

Sark wrote on Twitter, just before the video was released on Sunday, that “TEEPHLOW – STRONGMAN – MEDIKAL – KOONTAKRA – DONZY – PAPPYKOJO >> TRUMPET on the 25 of December Biggest Cypher outta the motherland”

Ghanaians Don’t Understand the Music Industry and Its Business - Sarkodie 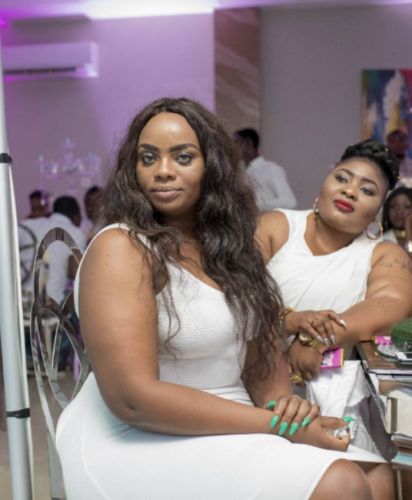 Ghanaian Actress on the run after borrowing huge cash from friend