The host of Adom TV’s ‘Badwam Ahosepe’, Sister Sandy on Monday granted an interview to the second wife of late Ghanaian musician, Daasebre Gyamenah and the narrative from Madam Amina Ibrahim has left Ghanaians in shock.

According to Madam Amina, she could barely feed herself and her nine-year-old son after two years since her husband’s demise.

Narrating her sad incident, she opened up on her poor state of life recounting an event where the big brother of the late highlife musician broke into her Kokomlemle apartment to throw her belongings out rendering her homeless.

Madam Ibrahim who now resides at her close friend’s house in New Town, a suburb of Accra, with her son seeks aid to help her get back on track.

“I am staying at my friend’s place at New Town in a single room. I used to live with Daasebre at Kokomlemle until his death but his big brother broke into the house and threw my things out”, she said.

Speaking to Sister Sandy, she also disclosed that after her husband’s death, there hasn’t been harmony between the two families [maternal and paternal] of Daasebre Gyamenah.

According to her, there were things going on in the house that if she had not taken her son out, she would have lost him…”, she said.

Asked if the Musicians Union of Ghana (MUSIGA) contributed to the family after Daasebre Gyamenah’s demise, she revealed that MUSIGA did their best but were reluctant to help due to the abuse of curses from her late husband’s family members.

“I don’t blame MUSIGA; because of the family disagreements, people had to back out due to curses and all that. People were throwing so many curses in the air”, she added.

She pleaded with Ghanaians to come to her aid so she can find a place of abode for her family.

“I have my belongings out and I want help so I can get somewhere to put my head…”, she said.

Madam Ibrahim said she has reported the break-in to the police.

Meanwhile, in post on Facebook, Sister Sandy has pleaded with the populace to come to Madam Amina’s aid. 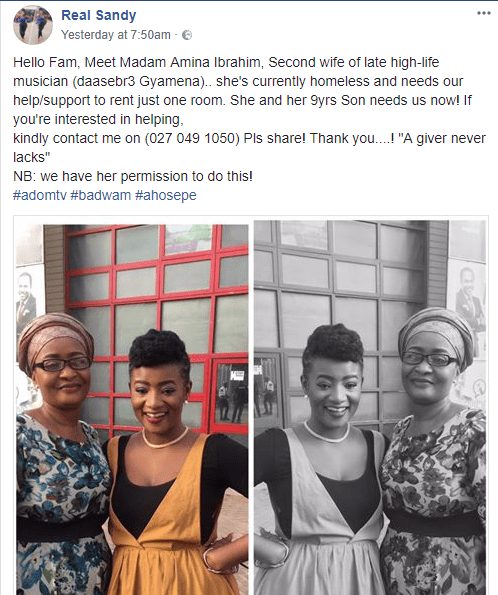