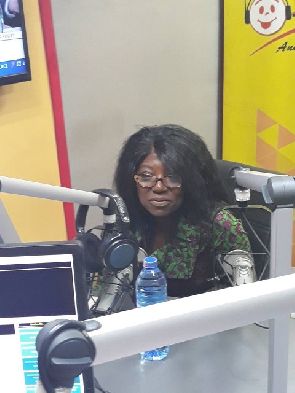 Dr Adu continues to reveal that, the over 200 tenants operating at the Accra’s trade hub were not paying rent to the company.

“Interestingly, no measures were fashioned out by the previous managers of the company to have the said tenants pay up the monies they owed to the company. All measures for revenue generation for the survival of the trade fair centre were ignored by the then managers of the facility,” she stated.

She added that operation of the International Trade Fair Centre was left hanging when she took over as CEO under the administration of Nana Addo Dankwa Akufo-Addo.

The CEO of the company made this revelation in a one-on-one interview on Happy FM’s ‘Epa Hoa Daben’ show.

She said when she took over as CEO, the Ghana Trade Fair Company Limited owed the Electricity Company of Ghana(ECG) and Ghana Water and Sewage Company (GWCL) several thousands of Ghana Cedis in terms of utility bills.

“The whole of Trade Fair Centre had one metre with the over two hundred tenants drawing power from the same source of metre. Hopefully, when I assumed office within ninety days, I took upon myself to ensure that all those who are indebted to the trade fair company pay up so that the company can survive,” she noted.

Dr Adu disclosed that company has been revived because of the prudent management measures introduced under her administration.

She stressed that the company is seeking a public-private partnership to develop amusement centers to better serve Ghanaians and called on organizations to submit their proposals.

Meanwhile, the centre will be opened for Ghana International Trade Expo on February 28 to March 8, 2018.