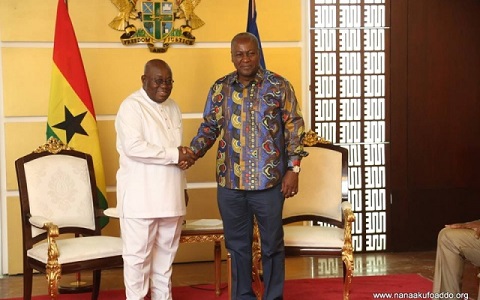 Former President John Dramani Maham has reacted to claims that the capital investments made by his office during his presidency cannot be seen although, under his leadership, over seven hundred (700) communities were added to the national grid for rural electrification benefits.

His office has refuted claims that Mr Mahama only embarked on ‘Ghost Projects’ as revealed by President Akufo-Addo. In a statement copied to netbuzzafrica.com, the former President has listed all projects undertaken under his government.

The lengthy statement which was signed by the former President’s aide, Joyce Bawa Mogtari details projects from the road sector through to education, health, water and rural electrification.

The former president’s office argues that it is regrettable that President Akufo-Addo has yet again failed to exhibit candour in his speech, this time to the Chiefs and people of Nkoranza in Brong Ahafo Region and it is even more worrying when there is overwhelming evidence of the massive investment made in the provision of various projects for the people of Ghana.

The statement also goes on to say that Mr. Mahama, who remains grateful to the people of this country for the opportunity to serve them, is gratified that he was able to provide tangible development in all sectors that enhanced the quality of life of Ghanaians.

The former president’s office also took the chance to advise president Akufo-Addo saying “the least President Akufo-Addo must do is to add to his predecessor’s significant gains instead of rolling back the clock of socio-economic transformation. After seventeen months in office, what the people want to see are the projects initiated or started by the President since he was sworn into office.”