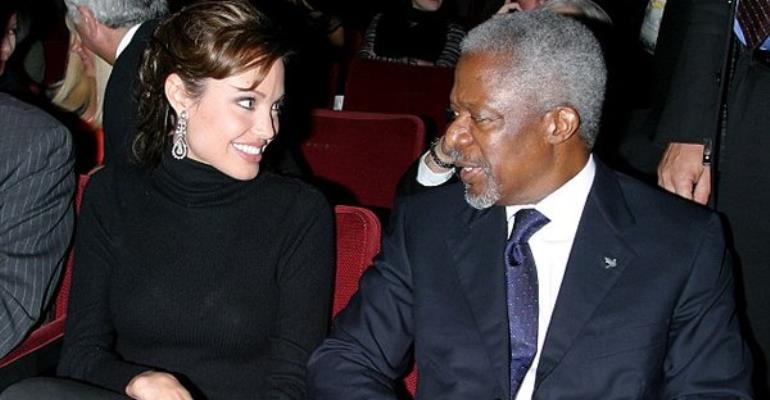 American actress, filmmaker, and humanitarian Angelina Jolie joins the world who are celebrating the memory of the late Kofi Annan, a Ghanaian-born former UN Secretary-General.

A world phenomenal figure. He and the UN were the co-recipients of the 2001 Nobel Peace Prize. He is the founder and chairman of the Kofi Annan Foundation, as well as chairman of The Elders, an international organisation founded by Nelson Mandela.

His death came as a shock to the world, especially when the majority were not aware he was sick.

Superstars around the world took to different platforms to express hearty condolences to the family of the late Annan.

Among them was American actress Angelina Jolie, who described Mr Annan as a man of integrity.

In a statement by Jolie, who is also UNHCR Special Envoy, said she is deeply saddened by the death and she will forever remember him.

“I’m deeply saddened by the passing of Kofi Annan, a true global statesman and man of integrity. Like many others, I will remember him for his kindness, his grace, and his calm strength of purpose. My thoughts are with his wife and family,” she said in the statement on UNHCR website.

Mr Annan served as the seventh Secretary-General of the United Nations from January 1997 to December 2006.

Kofi Annan met Angelina Jolie during one of the UN’s activities.

Angelina Jolie and Brad Pitt were once pictured with Mr Annan at the 2006 World Economic Forum in Davos.