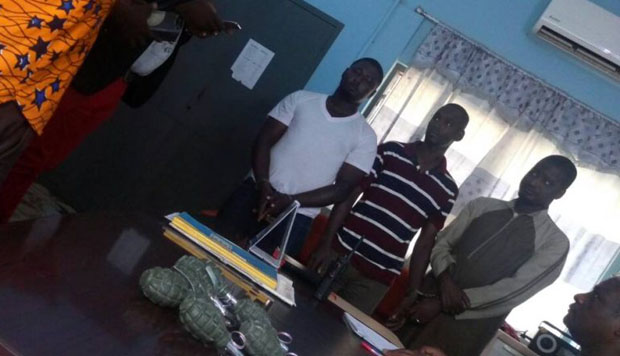 Police at the Odorkor divisional command in Accra have arrested some individuals in possession of grenades.

One of the suspects is believed to be a member of the dreadful terrorist group ISIS, police sources revealed.

The development comes on the back of a warning by security analyst Emmanuel Kwesi Aning that Ghana should be careful about a possible ISIS infiltration.

Dr. Aning has been tough and plain about security matters of the state, particularly recent proliferation of civic activism in the country, offering provocative analysis on security debates but nothing comes close to this latest incendiary predictions on the nation’s future.

He warned Ghana was at a tipping point of instability and forecast an infiltration of Islamic State terrorist network by 2020 due to the deliberate exploitation and manipulation of youthful exuberance by authority figures to achieve a political end,  and the inability of security agencies to act due to political interferences.

“What we are seeing is organized criminality, hooliganism, it threatens the stability of this country, and by 2020 either Islamic State would’ve infiltrated it or the al-Qaeda would’ve infiltrated it, because there is an army of the poor established by Islamic State, pay them thousand two hundred to two thousand dollars every month with a view to inciting youth from this part of the world to join them,” he hinted.