An operation is underway to evacuate thousands of tourists after a deadly earthquake that rocked some of Indonesia’s most idyllic islands late Sunday night.

At least 98 people, all Indonesian nationals, were killed when the 6.9 magnitude quake struck the popular tourist island of Lombok, Indonesian authorities said Monday. More than 200 were also injured.
The majority of those killed in the quake were hit by falling debris from collapsing buildings, said Sutopo Purwo Nugroho, the head of Indonesia’s disaster management department.

In total, an estimated 20,000 people have been displaced by the massive earthquake, Nugroho said.

Related Articles
Dramatic video tweeted by authorities showed hundreds of people, many believed to be foreign vacationers, crammed onto a beach on the island of Gili Trawangan as evacuation measures got underway.
Emergency personnel were racing to evacuate thousands of tourists from the three small Gili Islands as night began to fall. The islands, famous for their white sandy beaches and clear waters, are located near the epicenter of the quake on Lombok.

Earlier rescue efforts were hampered by shallow waters, but rising sea waters mean nine ships are now expected to dock on the islands.

So far, up to 2,700 tourists have been moved from the Gili Islands, according to Nugroho. He added that Lombok’s airport was now open around the clock and had significantly increased its flight schedule.
The epicenter of the quake was in northern Lombok, a more residential, less developed part of the island. The majority of Lombok’s tourist resorts are on the island’s southern coast. 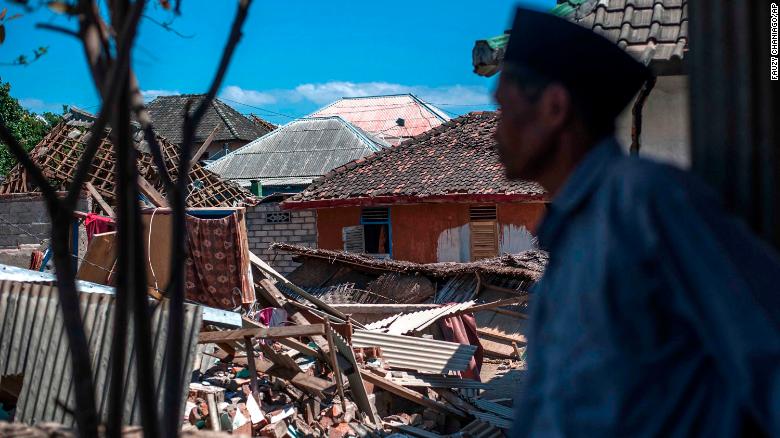 British tourist Mike Bennett, stranded on the island of Gili Meno along with around 100 other people, told CNN he faced an anxious night ahead.
“It’s getting dark now,” he said. “There’s no power, there’s no water, we’re going to hold out and just see what happens tomorrow.”
Tags
Indonesia earthquake