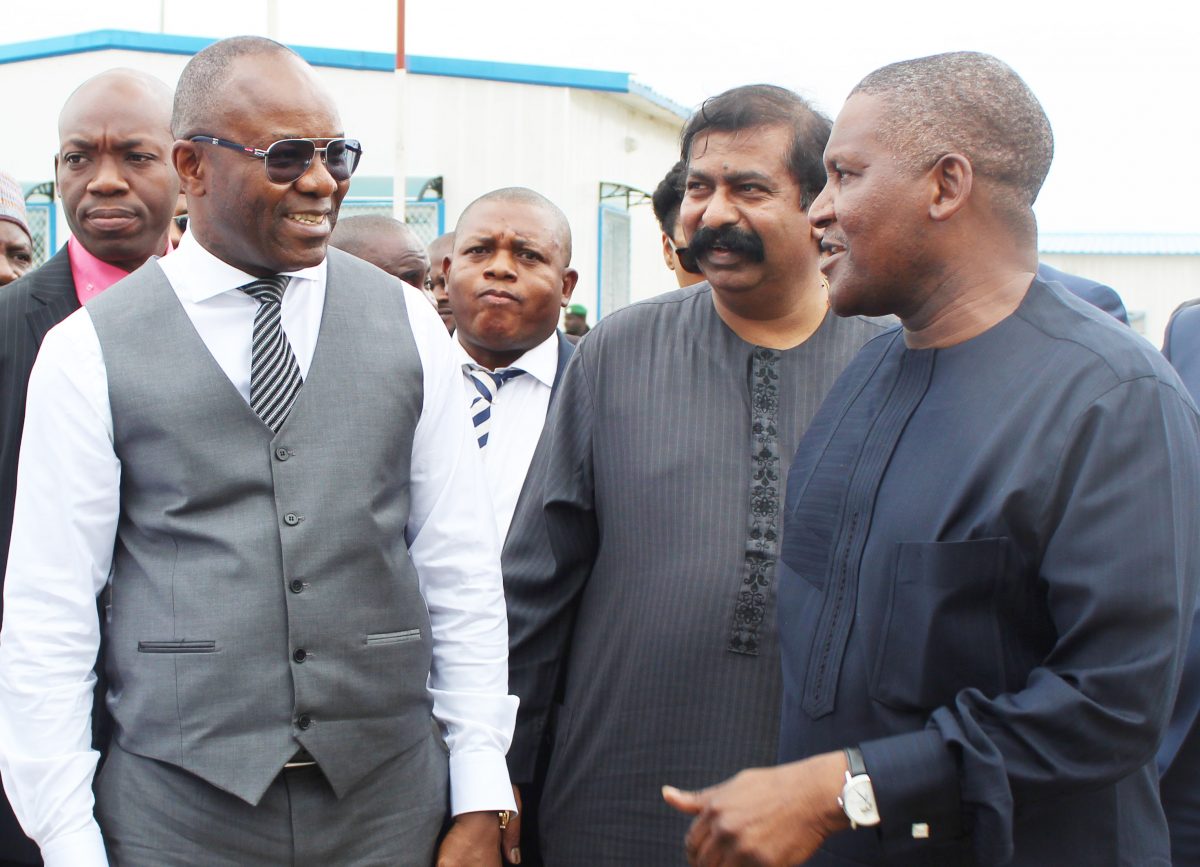 The Federal Government has said it relies heavily on the Dangote refinery to fulfill its promise to Nigerians to end fuel importation by December 2019.

To this end, the Minister of State for Petroleum Resources, Mr. Ibe Kachikwu, who visited the Dangote oil refinery site at Lekki Free Trade Zone, in Lagos, said the government is ready to play its part as a responsible government to assist in making sure the project is completed before the scheduled date.

The minister, who said he was overwhelmed by the dimension of the project, explained that the present government had always believed that the private sector holds the ace in industrialization efforts of the government, and noted that the belief has been reinforced by what Dangote Group is doing.

Said he: “It is good to say that private sector is the answer to Nigeria’s problems with a project as big as this. The challenge I will give you today is that of time; I see your time for completion is 2019 December, but I am sure you will understand my greed if I tell you that the refinery component of this project should come earlier than the set date.

“I have made a very firm commitment to Nigerians that I must stop the importation of petroleum products by 2019 and I am going to keep to it. It is absolutely important that we do this early and given the feat that we have achieved in terms of speed of construction and I urge you to do all within you to achieve its completion before the due date.

“I am sure His Excellency President Buhari will be absolutely enthused if he were to find himself, not only crystallizing the policy position we have taken so far but also coming here himself to come and open a facility as big as this before the end of his first term. Whatever configurations your engineers have come up with, I urge that they go back to the drawing board and get me my refined products before your said date.”

In his response to the government’s challenge, Dangote said he has accepted the challenge and would do all possible to achieve the feat. 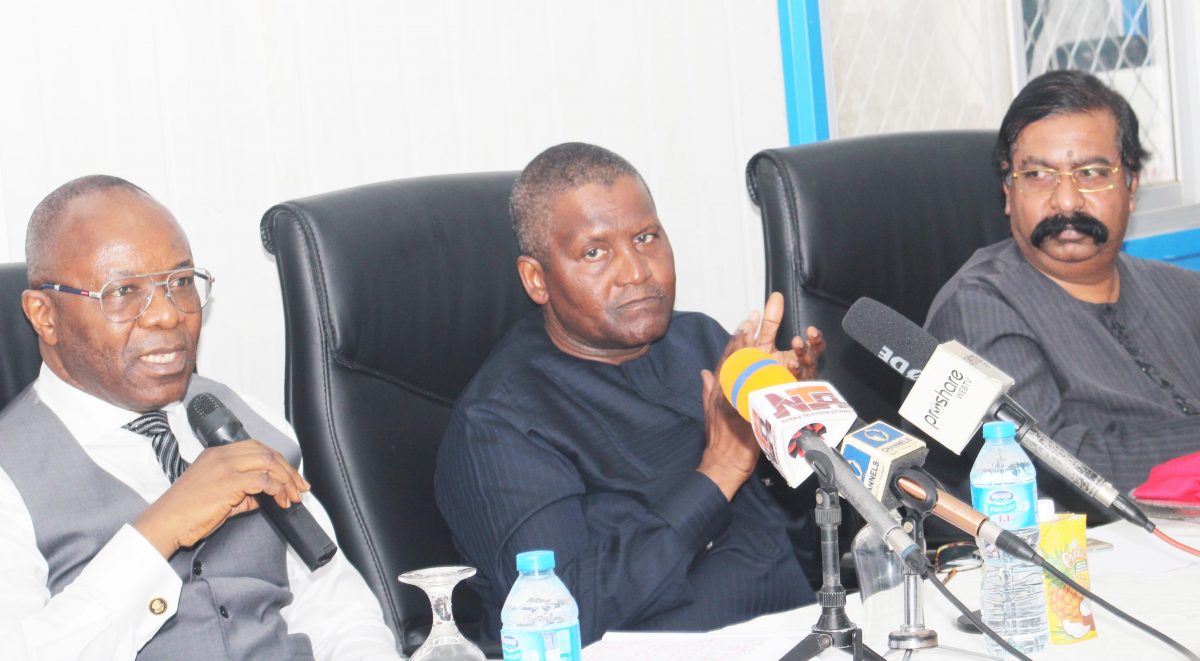 In this regard, the President of Dangote Group stated: “On the honorable minister’s challenge, we are going to make it by the grace of God. I am sure the minister will support us to make sure that we meet his challenge.

“What the minister is trying to do is the best so far for our country, his own version is that Nigeria should not think of exporting crude; you know the problem we have in Africa is that we only export raw materials, not finished goods, so he is saying that, look, we should all do this by adding value and I pray that even at 2.5 million barrels, we should not export much, in terms of the crude.

“We will go back and see what to do to make this happen by fast tracking our processes since the Minister has assured of government’s cooperation and support”.

Earlier in his welcome address, Dangote explained that his group is building the world’s largest single line refinery, Petrochemical Complex, and the world’s second largest Urea Fertiliser plant. The refinery, according to him will have the capacity to refine 650,000 barrels of crude oil per day. The Petrochemical Plant will produce 780 KTPA Polypropylene, 500 KTPA of Polyethylene, while the Fertiliser project will produce 3.0 million metric tons per annum (mmtpa) of Urea.

“In addition, we are also building the largest sub-sea pipeline infrastructure in any country in the world, with a length of 1,100 km, to handle 3 billion SCF of gas per day. We also plan to construct a 570 MW power plant in this complex. As a matter of fact, gas from our gas pipeline will augment the natural domestic gas supply and we estimate an additional 12,000MW of power generation can be added to the grid with the additional gas from our system.

“We will be adding value to our economy as all these projects will be creating about 4,000 direct and 145,000 indirect jobs. We will also save over $7.5 billion for Nigeria annually, through import substitution and generate an additional $5.5 billion per annum through exports of the refined petroleum products, fertilizer, and petrochemicals. We envisage that these projects, which would cost over $18billion, would be completed in 2019”. 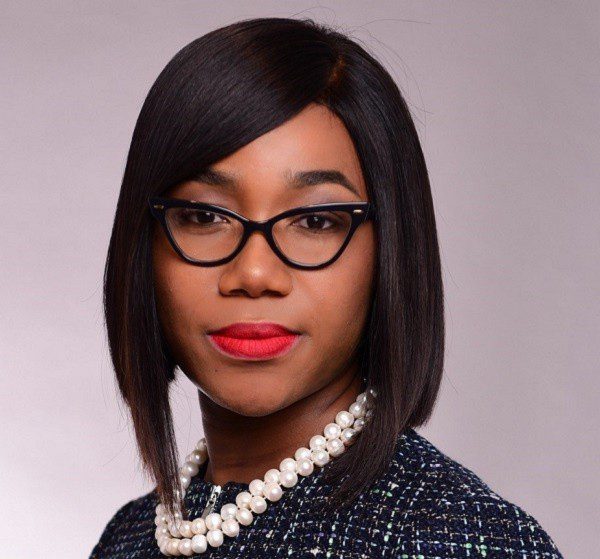