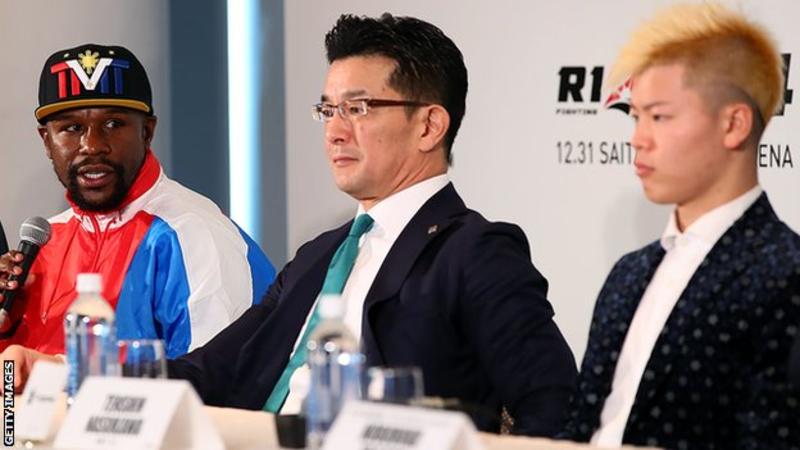 Retired boxer Floyd Mayweather and the world’s highest-paid celebrity by Forbes, says he did not agree to face Japanese kickboxer Tenshin Nasukawa in an official bout as reported by NetbuzzAfrica.com earlier.

The former 5-weight boxing world champion says  he had “never heard” of the Japanese kickboxer until this week.

Floyd was said to have agreed to face Nasukawa in Japan on 31 December, 2018.

Mayweather, 41, in a recent post has debunked all reports saying he had only been asked to compete in a non-televised event for “wealthy spectators”.

“Once I arrived to the press conference, my team and I were completely derailed,” he said.

“We should have put a stop to it immediately.

“I can assure you that I too was completely blindsided by the arrangements that were being made without my consent nor approval. I was hesitant to create a huge disturbance by combating what was being said and for that I am truly sorry.”

Floyd Mayweather continued: “First and foremost, I want it to be clear that I, Floyd Mayweather, never agreed to an official bout with Tenshin Nasukawa.

“In fact [with all due respect] I have never heard of him until this recent trip to Japan.

“I was asked to participate in a nine-minute exhibition of three rounds with an opponent selected by the Rizen Fighting Federation.”

The unbeaten American extended his record to 50 wins in August of 2017 with victory over UFC star Conor McGregor in a bout which earned him a reported $300m (£228m). Nasukawa on the other hand, holds a record of 27-0 in kickboxing and a 4-0 in Mixed Martial Arts.

In an extensive post on Instagram, Mayweather who detailed his version of events did not make clear if the exhibition contest will still go ahead.

5 exciting things to do at SOHO Square in Egypt