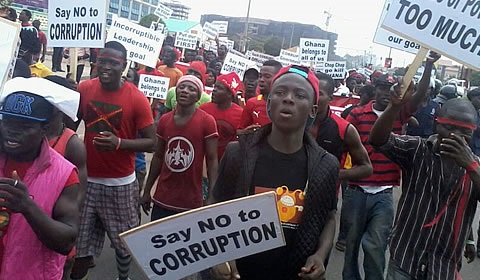 In the 2016 edition of the Corruption Perception Index (CPI) scored Ghana 43 points out of a possible clean score of 100 and showed that Ghana’s performance has dropped by four percentage points from its 2015 score of 47 points.

A release by the Ghana Integrity Initiative (GII), the local wing of Transparency International (TI), a civil society organisation focused on fighting corruption worldwide, said this score was the lowest in Ghana’s CPI scores since 2012 when CPI scores became comparable.

Related Articles
In the latest report, Ghana has recorded its worst performance in the last six years in its fight against corruption, the latest corruption perception index (CPI) has revealed.

Cumulatively, Ghana has dropped eight points since 2016, the CPI which was released Wednesday, February 21 by Transparency International showed.The CPI score indicates the perceived level of public sector corruption on a scale of zero (being highly corrupt) to 100 (very clean).

Presenting the report, she said Ghana performed “not too good”.

“Since the CPI became comparable from the period 2012 to now, this is the worst performance that Ghana has had. This year, 2017CPI, we are saying Ghana’s performance from 2012 is the worst so far,” Mrs Ofori-Kwafo indicated.

She was however optimistic the situation could improve in the next three years by which time the various government interventions put in place to check corruption in the public sector would have started yielding results.

The newly created Office of the Special Prosecutor, the paperless port system and the Ghana Post digital addressing system were some of the initiatives she observed could help Ghana shore up its ranking

“When we are able to get the gains of the new initiatives; the paperless port, the digital addressing system and the powers of the Auditor General to do the disallowance and surcharging and then office of the special prosecutor that has come on board…if all these initiatives work very well for us, we’re hoping that in a year, two years, three years to come, we should see a rise in Ghana’s CPI,” she expressed.

Generally, the 2017 CPI showed majority of countries were making little or no progress in ending corruption.

It also showed journalists and activists in corrupt countries were risking their lives daily in an effort to speak out against corruption.