Manager of young actor, Abraham Attah, Mawuko Kuadzi says the caretakers of Emmanuel Nii Adom Quaye known as Strika are not to blame for his current predicament. 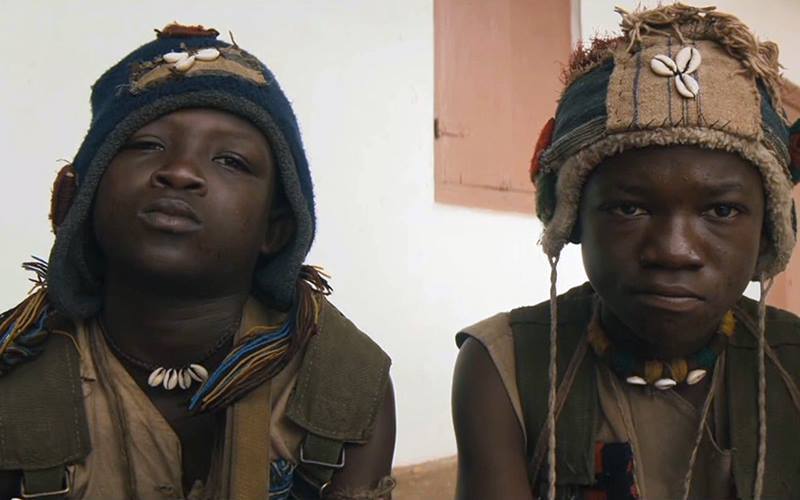 The ‘Beats of No Nation’ actor Strika became a popular topic in Ghana’s showbiz landscape after news went viral that he is currently a street beggar but according to his  management, the statement is false.

MK Content, management of Emmanuel Adom Quaye ( Strika)  has addressed rising issues concerning their client in a recent press release. In a statement signed by Mawuko Kuadzi, dated 21st August, Emmanuel Nii Adom Quaye ‘Stirka’ has been confirmed as truant who ran away from his school at Cape Coast Montessori.

The statement continues to say that Emmaunel is not a street beggar as reported. He has a fully paid apartment in Cape Coast where his other co-actor Justice lives with him and his guardian. He has an allowance and is studying in a private school fully paid by the producers of Beasts of No Nation with contribution from Netflix. Read the full press release below.

Emmanuel played the role of Strika, a mute child soldier in the award-winning 2015 American war drama film, ‘Beasts of No Nation.’

Prior to this development, the young actor’s caretaker and fellow actor on the ‘Beast of No Nation’ project, Kobina Sam had indicated that Emmanuel was in school in Cape Coast and returns to Accra only on vacations.

However, speaking to MzGee on Hitz FM, Mawuko Kuadzi, manager of Abrham Atta has revealed that Strika’s situation was not new as the lad keeps absconding from school.

“..Strika runs away sometimes… I think because of the community he grew up in, he misses the street,” he said.

Mawuko added that school authorities had done their best to keep Strika in school but to no avail.

“There are measures but he finds a way to escape. The school has done a lot yet he still escapes, the last time he signed an undertaking that if he runs away, he should be expelled from the school [yet he absconded],” Mawuko noted.

The education of the orphan is at stake as Mawuko was unable to tell at the time of the interview if Strika will be readmitted to his school.

Abraham Attah’s manager debunked suggestions that Strika’s truancy could be a result of maltreatment.

He disclosed that the $30,000 the young man made from the 1% Netflix deal was intact in the bank and will be made available to him when he turns 18.

“…So the film sold and 1% ($30,000) was given to him and 1% was given to Abraham, his actually was put in an account with two signees, Joey and Popi, who worked on the film. The money is still in the account; there is a plan which he knows. The money has not been touched, it is still lying there for him and he has been told when he turns 18 he has the right to the money,” Mawuko revealed.

Mawuko rejected suggestions that he and Kobina Sam have failed as custodians of Strika.

“He (Kobina) hasn’t failed, I don’t think anybody is saying his family has failed him so I don’t think anyone should say we have failed him. I think we are doing our best. I don’t think there is a problem with the guardian or with myself, maybe Emmanuel is the problem we have to talk about,” Mawuko told MzGee.

Watch: Gibrilville’s ‘Open Up’ tells the story of illegal immigrants in US