Two motorbike accident victims, who had their legs amputated at the Central Regional Hospital in Winneba under what they termed questionable circumstances, are demanding a probe into the matter. 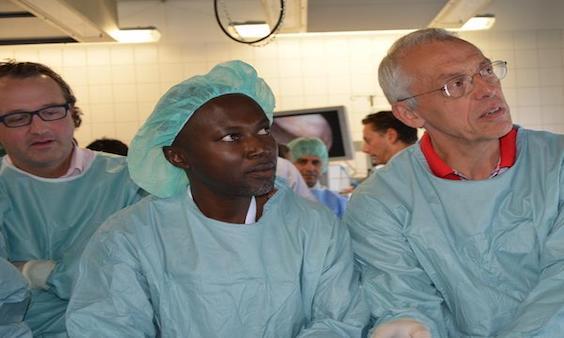 The two people, Jacob Mensah, 25, and Isaac Amankwaa Annor, 33, were sent to the Hospital on a referral from the Kasoa Hospital after their motorbike collided at Denkyira near Kasoa, and sustained leg injuries.

According to their family members, a medical doctor who was on duty at the time, George Kwame Prah, told them the legs of the two would have to be amputated but they kicked against that decision.

Albert Mensah, whose 25-year-old brother was a victim, told Onua FM Wednesday that his brother who was conscious and the family resisted Dr. Prah’s attempt to amputate the leg.

For them, he explained the level of the injury was not deadly to warrant amputation, hence cautioned the doctor against his decision. He said they informed the doctor to treat the injury as they intended on resorting to alternative medicine to heal him upon discharge from the Hospital.

Albert Mensah claimed Dr. Prah agreed and they were made to pay GHC10 and GHC70 for bandage and medicine respectively.

Unknown to them, he alleged that his brother and the other victim were taken to the theatre where they were sedated, and had their legs amputated without a verbal or written consent from either the victims or their families.

According to him, when they realised the legs of the victims have been amputated, he personally confronted Dr. Prah but he refused to explain his action.

He also said the doctor refused to give or let the family see the amputated leg when they demanded it.

The family members of the victims are raising a red flag over the professional conduct of Dr. Prah in the matter and demanding investigation into it and where necessary, appropriate sanctions applied.

When contacted, Dr. Prah who is also the Medical Superintendent of the Hospital confirmed the allegation that consent was not sought before the Hospital amputated the legs of the two victims.

He said the victims were brought to the Hospital with an “unknown” status, meaning their relative was not around, which he said was the reason why consent could not be sought.

At a meeting with the relatives of one of the victims in his office Thursday evening, Dr. Prah denied that he was the doctor who performed the amputation operation but declined to name the said doctor.

However, when the relatives left his office, he admitted to our reporter to having performed the operation “to save their lives”.

Prah pointed out that the opinion of the family members that the injury sustained by their relative was not life threatening couldn’t be medically correct. He also declined to give further details on the matter, claiming that the Hospital authorities have not given him the clearance to speak on the matter.