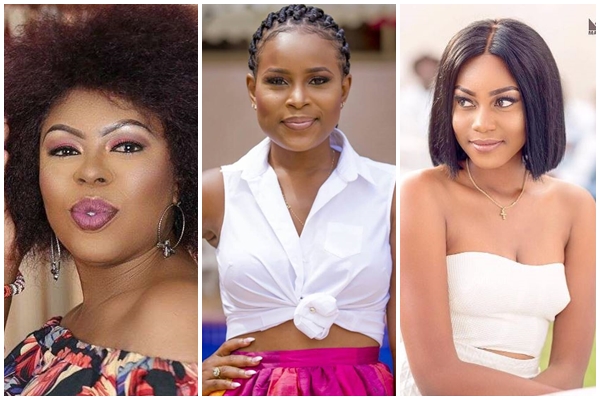 Not long ago actress and producer Yvonne Nelson blew the cover of GhOne TV’s presenter Berla Mundi after she criticized her on the Late Afternoon Show.
According to Yvonne Nelson, Berla Mundi is dating a married man hence has no right to discuss other women equally in her shoes on her show.
To cap the situation up, comedienne Afia Schwarzenegger has also thrown some shade at her listing two names as the least to talk about when it comes to the married men the Tv host-Berla Mundi is currently dating.
Angry Afia Schwarzenegger was caught red-handed committing adultery in her matrimonial home last year but according to her, at least she married before ‘sleeping with another man.’
In the latest post on her social media page, Afia is advising Berla Mundi and her ‘turkey clothes’ guests to sit their ass down and humble themselves since she has a list of all the married men they are dating.
Afia Schwarzenegger’s accusation about Berla Mundi is as a result of comments she passed about her on her adultery scandal on ‘The Late Afternoon Show’ on Gh One TV.
“Madam Character, my bad character doesn’t extend to sleeping with people’s husband for job nor doing make up at @nancyblaq on credit,” she begins…

“Dear people with good character sleeping with people’s husbandssss .. My bad character doesn’t extend to someone’s matrimonial home; my bad character doesn’t extend to sleeping with people’s husband for job nor doing make up at @nancyblaq on credit,i don’t rent clothes to slay either.. Its a pity that things like these can open their mouth to talk about character… Becos some of us due to the respect we have for some people has chosen to be silent on things… Madam Character…may be the host of the Character show didn’t tell you that she is blackmailing someones husband for her job and becos the husband is a friend to the boss they kept her.. Madam good character tell your host we know her relationship with Mr Adams who is also married n a politician..making it already 2 married men. Yes, my character is “not to take nonesense from nitwits” like thee and heaven n earth will bare me witness it s better than warming the beds of married man…at least i married, yours is just Ashawo to rent clothes for social media likes…So Sit ur fucking turkey clothes ass down n be humble…cos your characters are disgusting to say the least…we see all of you all the time but u see ur Ashawo business is none of my business!!! Character my ass……How dare u talk about marriage when even ur dog has refused to propose to you…foolish girls,how dare u…foolish ambassadors of abortion. How dare u talk about relationship aboa when every thing that have sex with you denies you…And when u want to talk about me pls wear better clothes…yall look like slaves Dont dare me cos i have ur list”