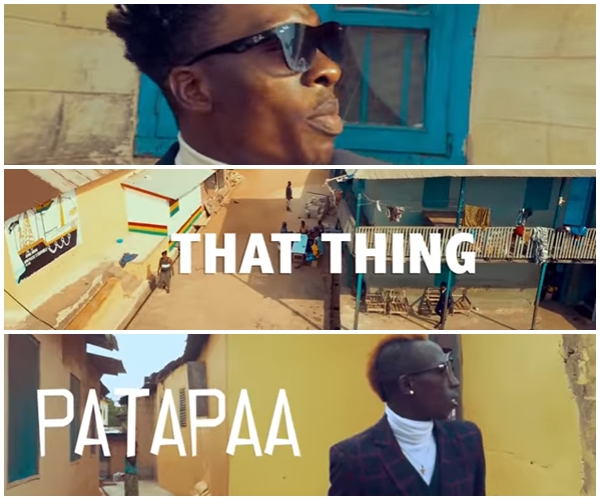 African fusions are lately taken over in the music industry and it’s quite interesting to note that Africa musicians are gradually ignoring the hard-hit-sounds, metal and all the crunk mixes to embrace something from their homeland.

While South Africa’s Durban-Gqom is one of the most popularized music in recent times, Pa-to-pa Ske-len-ken will be the next big thing the West Africa region will experience after the “One Corner” craze.

Despite its tawdry commercialism and the stress it too often induces, the video  for “That Thing” is quite unusual but more of it compliments one of the fastest growing artist on the continent – Patapaa.

An amazing video concept that could have taken the chance to promote both their localities but instead, it’s coupled with a whimsical dress code in a village-environment! What were they even thinking bruh? Never mind, in their mind, it’s a village-life shoot and everyone will get it. Well, sorry, Samcilla doesn’t see the creativity here except that it’s just the life Patapa is famously known to be living that’s mostly expressed in the video while Article Wan took the time to shine-glory on his singing prowess allowing the vibe to keep you on your toes.

And oh that phrase is “RACK YOUR BRAINS” which is also spelt as “WRACK BRAINS” not “CRACK YOUR BRAINS” as Article Wan heavily expressed in the song. It’s such a penitent at a crucial stage in his music life, though, you can see intuitively that Article Wan’s totipotency and differentiation seem to be at odds with each other in his lyrics on “That Thing“.

With the 2.0 rap verse Patapaa delivered, I’ll leave listeners and viewers to focus on the spot-jamming chorus. A good song by all danceable standards with an okay-we-will-take-that-thing-like-that-video.

It’s now clear that some Ghanaian artists are just taking listeners for a ride although they have great choruses to move feet as I’ve been dancing throughout the whole review, but the inadvertent incorrectness of their lyrics should be highly checked for the amelioration of other up and coming musicians who grope around them.

Video directed by Gordon Appiah. Check it out below.