About 130 pupils and teachers of Tabiri Gyansa Junior High School at Mpasaaso Number One in the Ashanti Region, have been left without shelter after fire ravaged their three-unit classroom block. 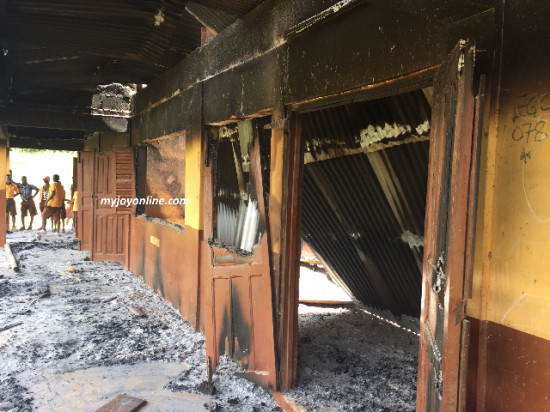 Though the cause of the fire has not been established yet, school authorities suspect a group of pupils who had been asked to repeat their class for non-performance, is behind the fire.

News of inferno at the school which sits on the outskirts of the town came as a surprise to many because there is no electricity there.

Distress calls to the nearest fire station at Mankranso yielded no result. Members of the community managed to salvage only a few pieces of furniture.

Pupils and teachers arrived at the compound Thursday morning to a devastating sight of the destruction.

They later wore red armbands, calling for investigations to track down and bring the perpetrators to book.

The pupils said they brought the threats to the attention community leaders and police after an earlier arson attempt.

Though teachers will not speak on record, they said they have been targets of robbery.

The community is saddened at the incident.

Nana Obiri Yeboah, a concerned parent said the whole community has kept awake since the time of the incident.

Police at Mankranso have commenced investigations into the matter. District Commander, Supt. John Adusei indicated that they are working with the community to uncover the mystery behind the incident.

“We have been on the ground since the incident happened, my men were even present when the fire was consuming the building. The people are suspecting arson so we will consider that as well”, he said.

The community has proposed a Senior High School structure under construction should be used temporarily by the displaced JHS pupils.

Omanhene of the area, Nana Tabiri Gyansah said the community will prepare the proposed site to receive the students.

Meanwhile, the District Education Directorate has assured that it will liaise with the community to resettle the pupils, based on advice from the District Security Committee.

Teachers upon request will be transferred temporarily from the community until the place is declared safe for them.

“Teachers do not feel safe so we will also consider their safety in every step we take”, he Mr. Osei Brenya added.